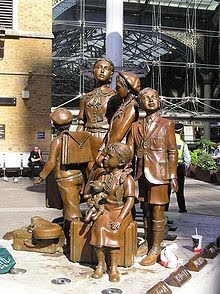 She will be turning 90 next year, was born in Dusseldorf, Germany and transported by rail and boat to England in February, 1939--one of
10,000 children saved by caring parents from the onslaught of the Nazis.

There, she was taken in by a caring family.

Her father had died in the early 1920's and her mom raised her. Her mother left Germany bound for Chile two days before Hitler invaded Poland on September 1, 1939, the official start of WW II.

And it was 10 years later that Hana Deutch was reunited with her mom in Chile.

Our seder table was graced by her stately and elegant presence.

For many years, I have been attending my brother's seder--but not until this year did I once appreciate and identify with the experience of a miraculous 'exodus' that saved the life of this marvelous woman who has served as a commander in the Jewish War Veterans in the Jackson Heights community.

Thank you, Hana, for lighting up our Seder with your presence.
Photo courtesy of Wikipedia
Posted by Richard Schwartz at 5:06 AM