Thank you, Jack Cavanaugh for laying out on the table many issues concerning American troop deployment to Iraq and Afghanistan. (Click here for the article.)

6,656 American lives have been lost in Iraq and the US military effort in Afghanistan has resulted in the death of 2,316 of our soldiers.

But these figures are not the main story.

These numbers are just a part of the larger story as we ask just what have we accomplished?

Why just last year in Iraq, the United Nations reported that 8,868 people were killed.

Have we contained weapons of mass destruction? 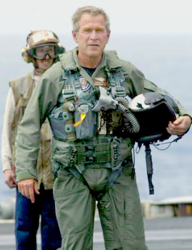 
Have we finished and then exited a mission that is 'accomplished?'

Have we achieved a peace in Iraq, while rooting out an elusive terrorist enemy in Afghanistan?

(Why JUST TODAY it is reported that 24 innocent lives have been taken by terrorists in Iraq as the Sunni insurgents try to disrupt the first democratically held elections since US troops departure in 2011.)

But the most horrific story that Cavanaugh's article deals with is the hundreds of thousands, yes HUNDREDS of THOUSANDS American troops that now suffer from severe emotional and mental distress.

This is making a nightmare for these returning serviceman, but is also an ongoing tragedy for their families, parents, spouses and children who must bear the unwelcome diurnal stresses placed upon them.

PTSD ([post traumatic stress disorder) is just one of the severe long-lasting disorders that CBS has been brave enough to expose on national TV.

The underlying apathy of America to her returning servicemen is intolerable.

The media is also to be apprehended for its shielding its readers from the horrors of these wars---over so many years --because of its failure to give daily prominence to the ugly butchery.

Does the American public even know that over 100,000 Iraqi civilians have been sacrificed while we fought on her foreign soil?

Posted by Richard Schwartz at 3:04 PM No comments:

Spring has sprung in Stamford, finally. 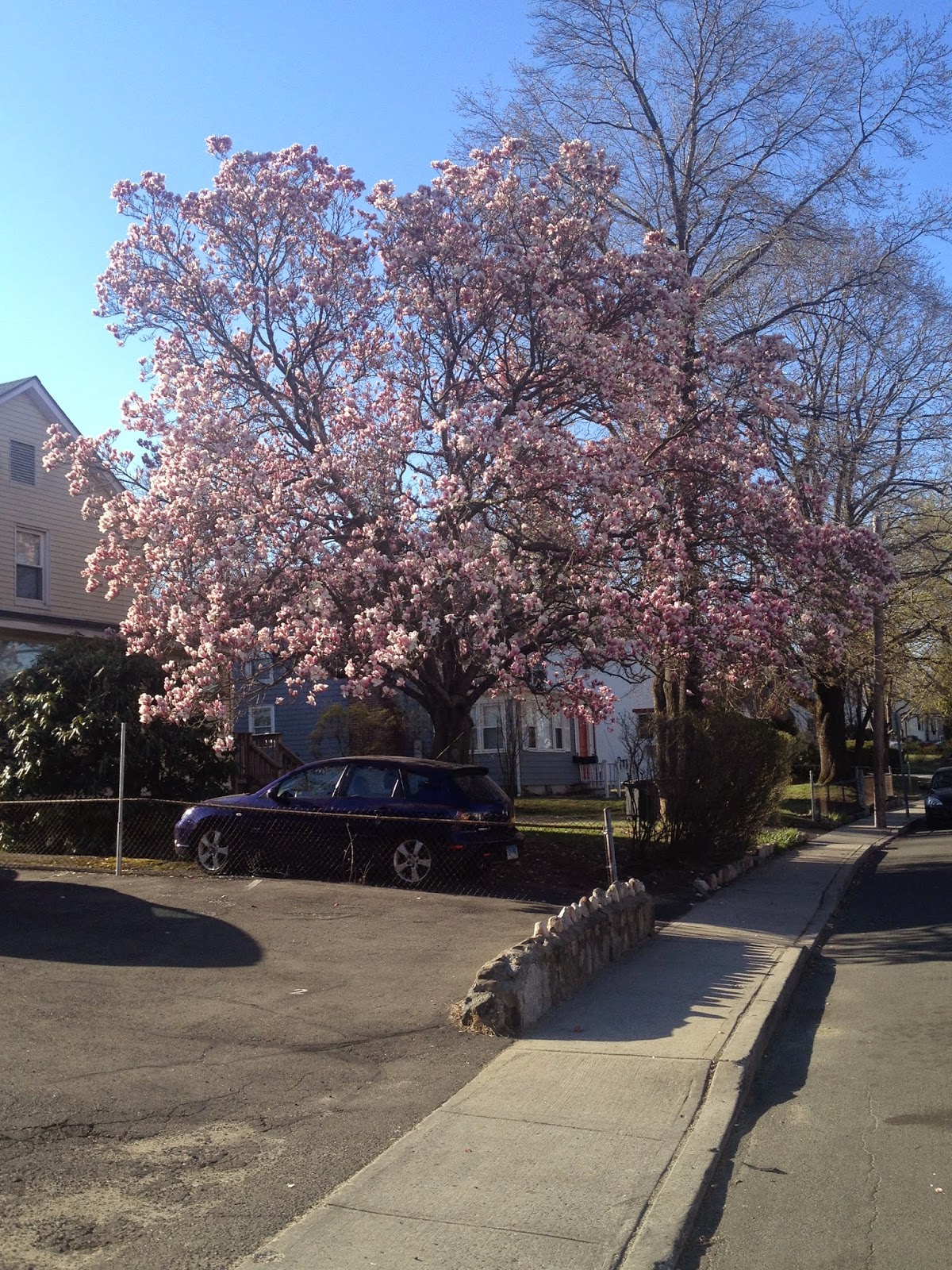 Magnolias are finally in bloom.

So, what's holding you back?

It's a great day to step out and enjoy the outdoors....
Posted by Richard Schwartz at 10:28 AM No comments:

The Bard turns 450 today! Here are some memorable quotes! 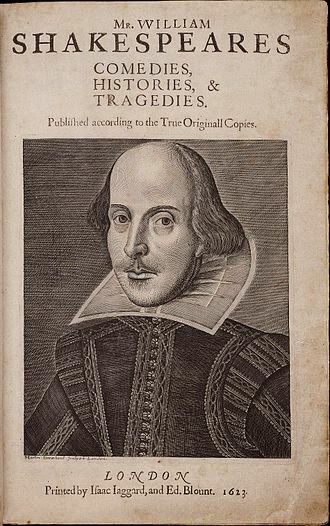 Title Page of the First Folio, 1623
Copper engraving of Shakespeare by Martin Droeshout
Courtesy of Wikipedia

The Bard of Avon (1564-1616) turns 450 today and what better way is there to honor him than through some of my favorite quotes from his works.

"What a piece of work is a man! How noble in reason, how infinite in faculty! In form and moving how express and admirable! In action how like an angel, in apprehension how like a god! The beauty of the world.The paragon of animals." Hamlet

"There is nothing either good or bad, but thinking makes it so." Hamlet

"We know what we are, but not what we may be."  Hamlet

"Listen to many, speak to few." Hamlet

"All the world's a stage and all the men and women merely players: they have their exits and their entrances;
and one man in his time plays many parts, his acts being seven ages." As You Like it.

"Oh, wonder. How many goodly creatures are there here!
How beauteous mankind is!  O brave new world,
That has such people in 't!"  The Tempest

"It is not in the stars to hold our destiny but in ourselves." Julius Caesar

"Some are born great, some achieve greatness, and some have greatness thrust upon them." Twelfth Night

Posted by Richard Schwartz at 7:45 PM No comments: 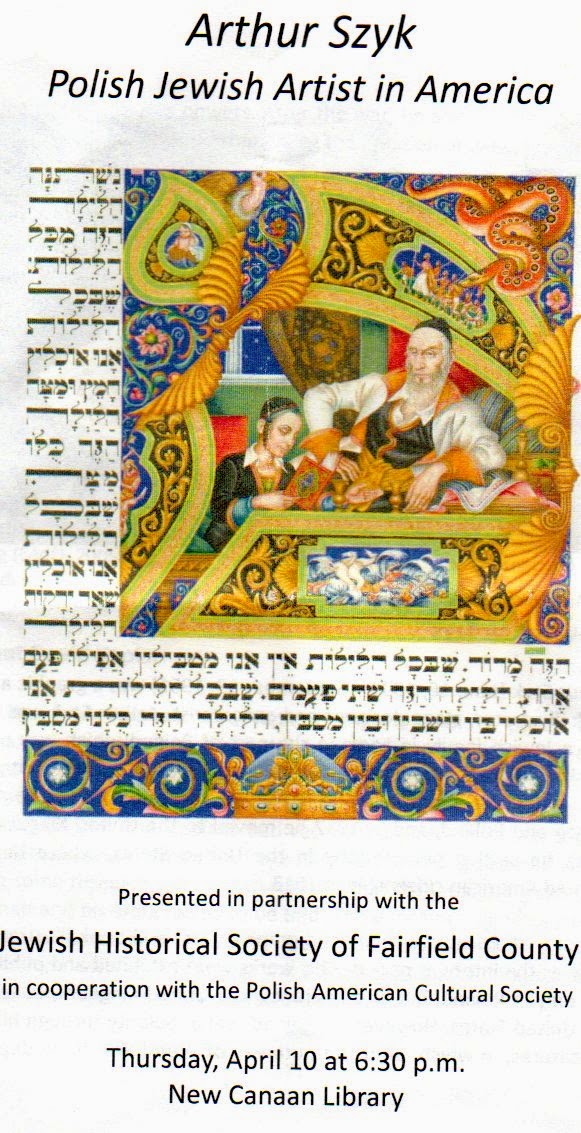 Pictured above on the brochure for this event is an illustration of the
Four Questions, the Mah Nishtanah, from Szyk's Haggadah printed in 1940

On the eve of Passover, it is a pleasure to share with you my delight at attending this special event sponsored by The Jewish Historical Society of  Fairfield County and hosted by the New Canaan Library along with the Polish American Cultural Society.

Szyk (1894-1951) was a Polish born Jewish painter, illustrator and satirist who has only recently been rediscovered. He is well known for a limited edition Haggadah, which contains 48 jewel-like illuminations that follow the order of the Seder with both Hebrew and English translation.

He labored on this work from 1932-1936 and it was finally published in London in 1940 by Beaconsfield Press and edited by Cecil Roth.

Szyk moved to the United States in 1940 and soon settled in New Canaan, CT.

Some of the highlights of the evening included the many  poster-size reproductions that lined the walls of the meeting room including the  illuminated Statute of Kalisz (1932) which guaranteed the medieval Jewish residents of Poland civil and religious freedoms; other posters included political satire and pages from the Haggadah.

Al Kaproski, President of the Polish America Cultural Society spoke about the harmonious relationship that has existed over the years between the Jewish and Polish communities in the Stamford area.

Kudos to the entire JHS team of volunteers for an excellent light dinner and and such an enlightening evening.
.
On display was a limited edition Szyk Haggadah that is a part of the JHS collection. 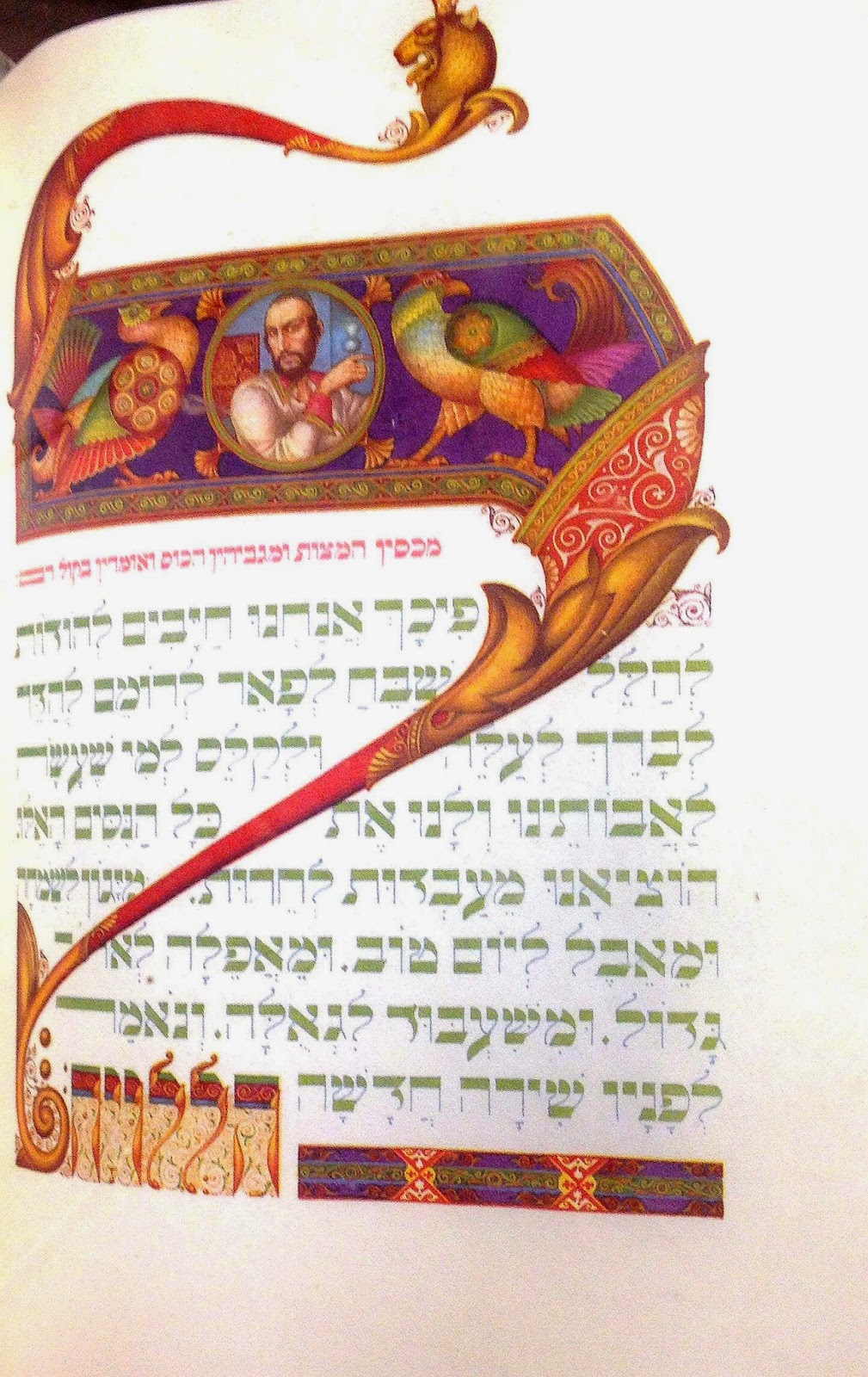 It will be on display at the Harry Rosenbaum JHS Judaica Library at the Stamford JCC located at 1035 Newfield Avenue on the following days:  Thursdays, April 17 and 24 from 10 am- 5 pm and Sundays, April 20 and 27 from 1-5 PM.

Posted by Richard Schwartz at 4:33 PM No comments:

A Must See for American Hustle fans: David Russell, brilliant writer and director and snubbed by the Academy, runs off with an Oscar (as does his grossly successful film!) Those of you who have followed this story know that the  Oscar judges stiffed David Russell's American Hustle last month though it received 10 Academy award nominations.

You can follow my recent blog of shocked protest  by clicking here.

As of today,  I am 135th in line on my library's waiting list to pick up a copy of this hot video--even though there are half a dozen videos circulating.

The movie is not just hot, in fact it is so scorchingly hot , indeed sizzlingly  hot-- so hot, in my estimation,  because in the last three weeks I have moved only twenty notches up. .

There must be  over a thousand cineastes, dear reader, at my local library all waiting to see Russell's flic-- all sending out the same strong message that this is a great movie.

By the way, the movie has already grossed over a quarter of a billion dollars worldwide. The Academy's snub seems to be paying off big time.

So, what are you waiting for?

Find a copy if you can!

But please don't run off with it!

Posted by Richard Schwartz at 4:06 PM No comments:

Some parting thoughts on the Russian winter spectacle: The 2014 Winter Olympics from Sochi

The Sochi Olympics are over.   Or are they? 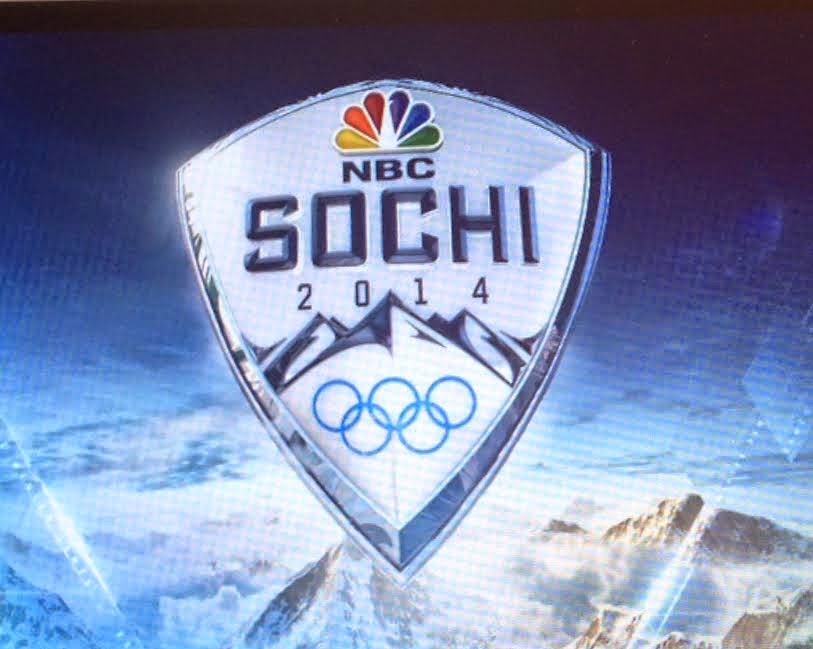 Without a doubt the games were ones for the ages.

Putin reportedly spent well over $50 Billion dollars on them with cost overruns running into the billions.

And his nation ran off with most number of gold medals number at 33, followed by Norway at 26 and Canada at 25.

Yes, we heard all the scuttlebutt: wild dogs roaming the streets on the eve of the big event, hotel accommodations were in short supply and those that were 'ready' for occupancy were deficient in plumbing and bathroom privacy in many cases. 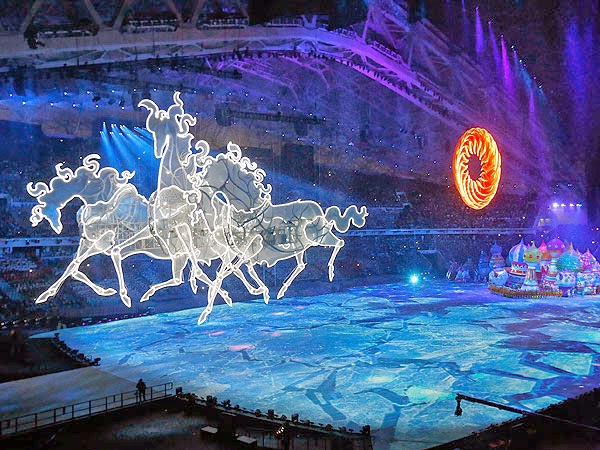 The enormous Russian Troika is here symbolized by its being pulled by three horses.
(compare the size of the digitized icons to the minuscule live spectators seen at center bottom)

The opening ceremonies on the first Friday evening (no words can fully describe them--I have seen them many times and highly recommend 'catching up' with them) were over the top with its idealized tribute to Russian history and its digitized creation of enormous free floating images (seen above and below) created by nearly 75 projectors. 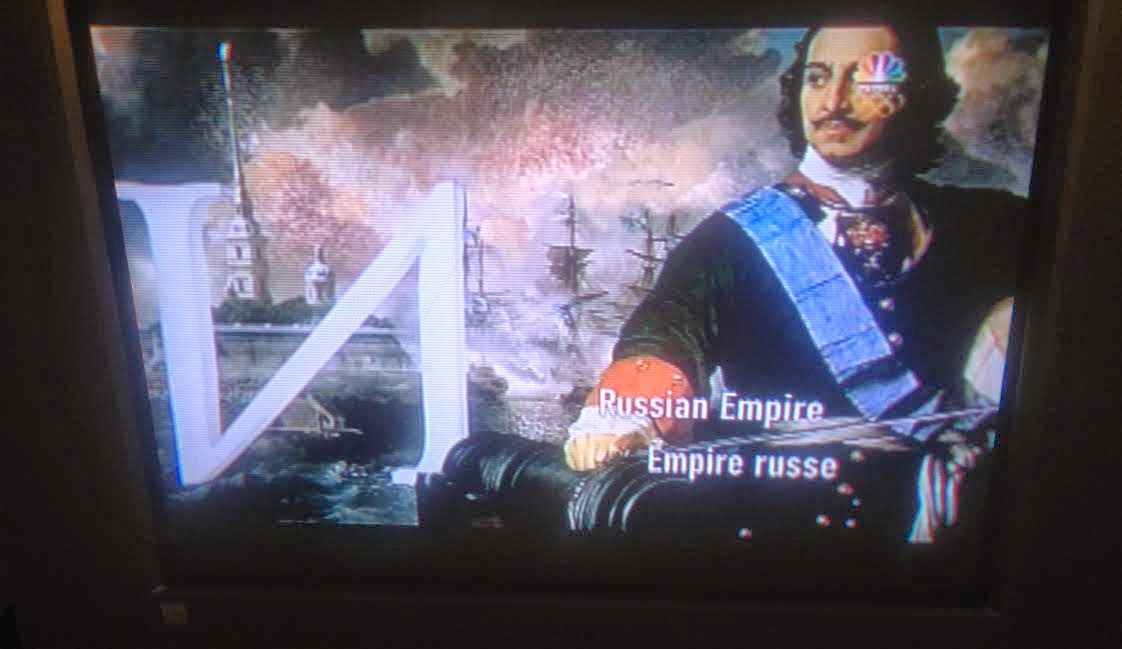 My DVR recorded dozens of hours of exciting competition and I am now reviewing the last two
recordings. Here is a tribute to some of the athletes before I delete these 'tapes.'

Dave Wise of Reno, Nevada is seen below bringing home the gold in the freestyle skating event in the men's half pipe. With heavy snow falling,  he is performing all kinds of aerobatic flips, twists and turns that are a marvel to behold. 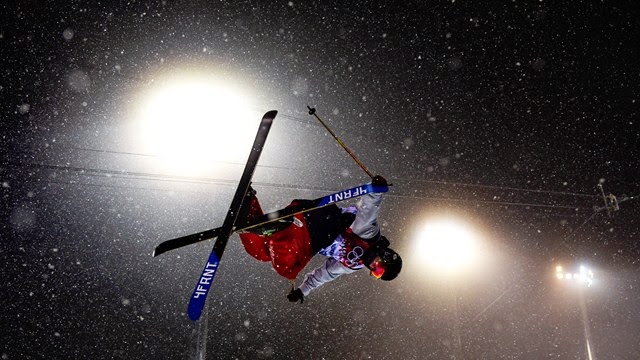 Mickaela Shiffrin, of  Colorado, the 2013 reigning world champ in slalom, comes in fifth place in her Olympic debut. Her parents, we learn, are very supportive of her career with her mom touring the world with her daughter every step of the way. 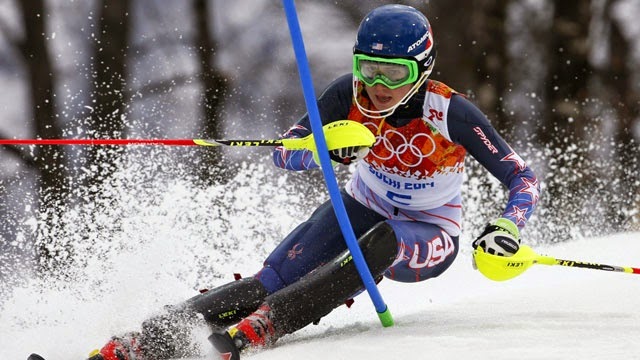 Mickaela Shiffrin competing on the  ladies' slalom course  at Sochi
from www.ksbw.com

The Shiffrin family mantra is not about results--it's all about practice. The family does not believe in chasing lots of events around the country.

The highlight of the last tape is the ladies' four minute free skating event. Kudos to the 17 year old Russian skater Adelina Sotnikova the gold medal winner. She showed amazing flexibility in her spins and was all about the athletic element in the program.

Of course, kudos also to Yuna Kim of South Korea, who took the silver. She is the reigning world  queen of women's figure skating from the Vancouver 2010 Olympics. Her skating was flawless and came in just behind Sotnikova.

Much controversy was stirred by Sotnikova's 'surprise' victory over a more accomplished and flawless performance by her rival.  Many feel that the judging process was skewered and thus biased in this event.
(click to open the story)

The best TV commercial, in my judgment, goes to Visa for its  Everywhere you want to be video, with Morgan Freeman doing the voice over. Click here and judge for yourself.

Finally, Kudos to the NBC Olympic team composed of executives, technicians and broadcasters for their excellent two week coverage.

This was certainly an Olympics for the ages!

The real question now looming  is just how far Vladimir Putin intends to push his sphere of influence in the Ukraine and other independent republics which once had been an integral part of the former Soviet Union.

Posted by Richard Schwartz at 4:18 AM No comments:

Over three years ago, I blogged about the Lady Husky basketball team, under coach Gene Auriemma, shattering the record at 89 straight wins.

Well, today, Husky fans have all kinds of reasons to celebrate. 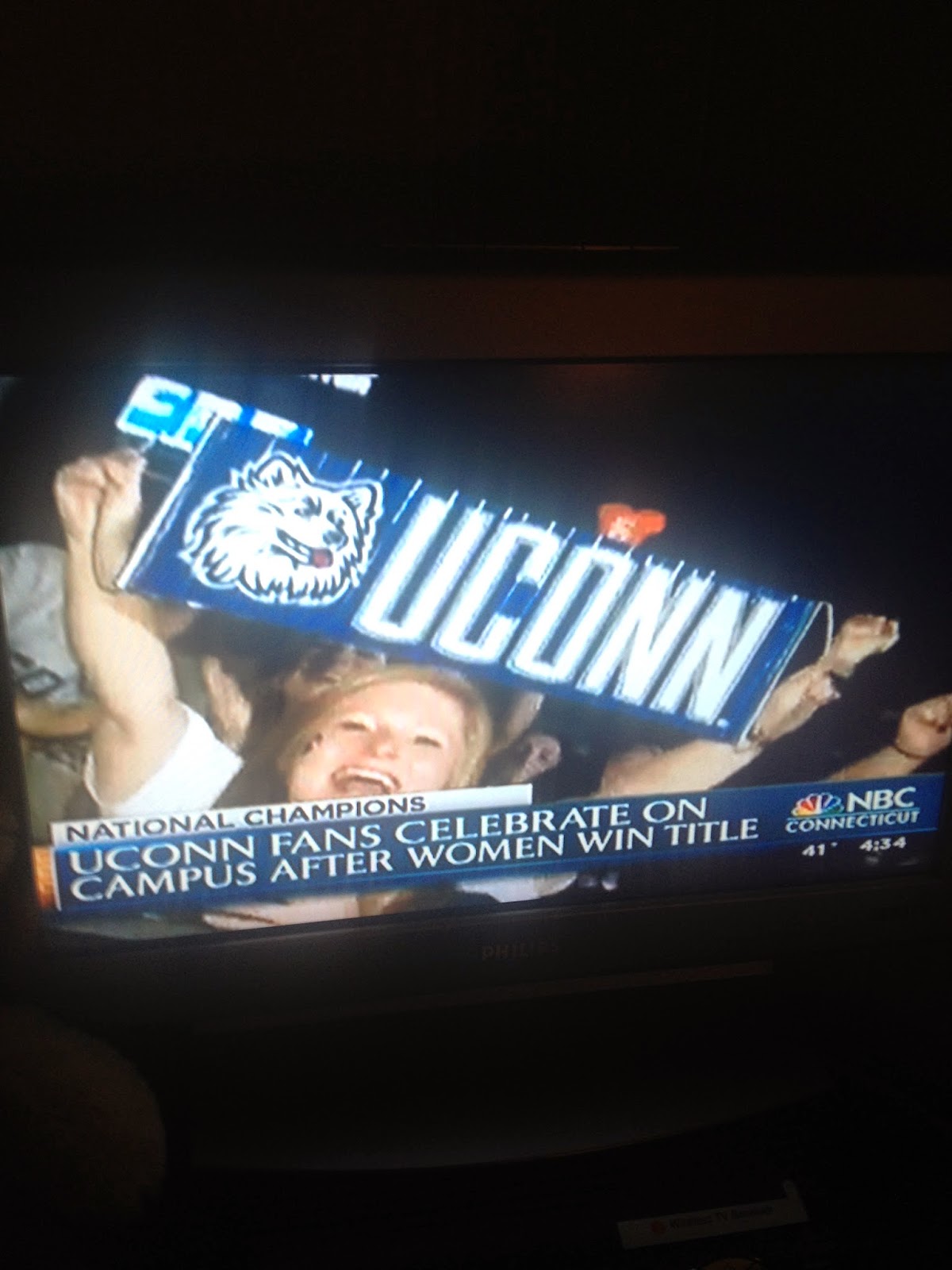 UConn fans celebrate on campus after the victory.

The game was never in doubt as Connecticut took command from the very start and held on tightly.

Here are some amazing stats:

This is their record ninth title since 1994.

This is their fifth undefeated season in the school history.

This is their first 40-0 season in the school history and represents  the second 40-0 record in NCAA history. Baylor was the first to do so in 2012.

The last time both men's and women's teams both catapulted to same year NCAA championships was in 2004.

There will be a victory lap at Storrs, Ct. this afternoon.

Posted by Richard Schwartz at 9:40 AM No comments: