Photography has been a mainstay in my life: Going from analog to digital

You might say that a yen for photography has run in my family for a number of generations.

My grandparents, newly arrived from Eastern Europe, had a number of businesses that provided them with a modest living.

One of them was a photography studio they set up in the Williamsburg area of Brooklyn. Their clientele were likewise recent immigrants from the old country. 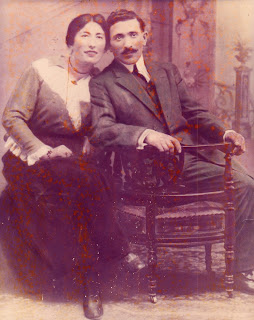 A Grand Couple: Ida and Morris pose in front of a camera.  Circa 1910

My grandparents Morris and Ida would take individual and family portraits; they would also do weddings and Bar Mitzvahs. Often on Saturday evenings after the Sabbath had ended, they would set up their gear in one of the many social/wedding halls and take still shots of the events.

The business was a 'family' project meaning that their children were included in the family enterprise; they accompanied their parents and so my dad, his brother and their two sisters worked the invitees soliciting business.

During the events, the family would return to the their darkroom to develop negatives, create photos and deliver the finished product the same night.

The photography 'bug' remained with my dad. While practicing medicine, he nurtured his hobby by joining a photography club of his colleagues. The club gave him access to darkroom facilities where he developed shots taken on his Contax 35 mm camera.

Here is a photo of the family, taken by  mom (in the Catskill mountains) and enlarged by dad into an 8x10. That is me standing in front of my dad holding my stuffed teddy. 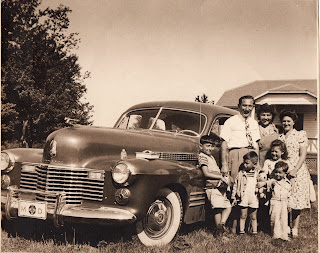 I recall dad carrying his light meter by which to set his F-stops or lens aperture openings. (Today's digital cameras do this automatically.) I recall his avid interest in taking photos at all family events and during our summer camping experiences. At these same events he, and often my mom, would also pull out his Bell and Howell movie camera. (I was often delegated to hold strobe lights so he would have enough light for the Kodachrome film especially when shooting indoors.)

The real fun would occur when the film, sent to Kodak for processing, was returned by mail; then we would get to see the color slides and the family movies projected on our home screen.

Dad passed on his love of photography to me. Initially, I learned how to shoot using the family Brownie with Kodak 127 film. It was a very easy camera to use--all I had to do was look at an image and shoot. As a teenager I began using an Argus C-4,  a 35 mm camera with a range finder. It even came with a flash which was easily installed.

Now, I could take my own shots. With the aid of my darkroom featuring a Dejur enlarger, I was able to develop, print, blowup and crop my photos. I recall going to the photography show at the Javitts center. Here I had the opportunity to capture a number of fashion models on film.

I joined the photography club in high school and was elected president. Here, I had the opportunity to take pictures and then develop and print them in the school darkroom. We had an Omega enlarger and what fun it was use.

I learned how to use a graflex, a rather bulky camera that was used extensively by press photographers.  You had to insert a plate holder in the back of the camera for each shot; each plate held a single negative. 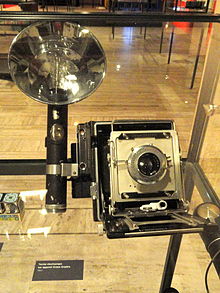 Graflex camera: similar to the one I used
in High School

What a pleasure to see my photos appear in the hometown and school newspapers with photographer credit.

By steps, I reached the digital camera age.

I  moved to California and invested in a quality non-digital single lens reflex, a Minolta XD-11. Dave of Dave's Camera Shop of Paradise sold me an outfit that included a telephoto lens, coupler and auto winder. The latter accessory, which automatically advances the film,  allowed me to take rapid shots such as catching birds in flight or quick action sports plays.

During my travels to such places as Costa Rica, Israel, Glacier, Yosemite and Lassen National Parks, my camera captured the natural wonders I beheld. Upon returning, I was able to relive and share these experiences with friends and family. (Today, I can do this instantly with my smart phone; but somehow it's so so different.)

I entered the digital age in 2005 with the coming of Hurricane Katrina. I flew down to New Orleans to do some relief work and I bought a Canon Power Shot G5, a 5 megapixel digital camera. 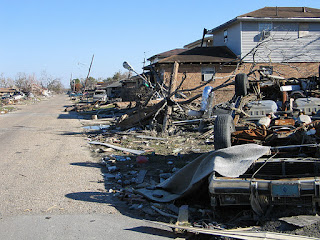 This workhorse has proved itself over and over again for the last 5 years. I have posted many shots and slide shows on my blog and  posted You tube videos for clients.  Here is a link to a fall foliage slide show I recently did:  http://rjschwartz.blogspot.com/2011/11/fall-foliage-illuminates-stamford.html

Here is a link to another slide show of Stamford's summer 2009 Art in Public Places:  http://rjschwartz.blogspot.com/2009/12/in-case-you-missed-roam-around-in.html

My appreciation of digital photography continues to evolve.

With the advent of the New Year, I have taken a step forward in the digital/informational smart phone age with the addition of an iphone.  The unit comes with an 8 megapixel camera, zoom lens, flash, cropping capability and other neat features.

Will the iphone camera replace my Canon Power Shot?

It is still too early to tell. Without a doubt, the iphone camera is much easier to transport and always have the camera with you. This facilitates taking instant shots on the go.

I also wonder what will replace the darkroom experience.