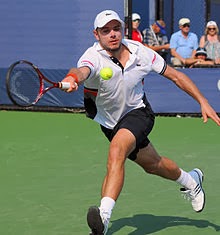 Everybody thought that Rafa Nadal, ranked number one in the tennis world, would be an easy winner against Stan Wawrinka, ranked number eight, in the final.

What an amazing and attention riveting final it turned out to be.

Rafa cramped up in the second set and his game faltered as he weakened.

He ran with his trainer into the tunnel presumably for pain killers as Stan complained vehemently to the chair umpire that he wanted to know what rule allowed him to just run off the court without tournament referee approval. Stan insisted on speaking with the latter to no avail.

Clearly, Nadal was not going to walk off the court and simply default as that would be too humiliating.

Meanwhile 8 minutes had passed with Stan continuing his futile protest and finally  Nadal emerged.......
AS THE CROWD BOOED.

An AMAZING  DRAMA was unfolding at about 4:15 AM and I felt rescued from the humdrum power-unleashed, predictable five-set  five hour final-like semi-finals featuring  Djokovic and Nadal that seemed to have been standard fare of the finals menu, oh oh , so often.

It was clear to me from the start of the match that Stan had raised his level above that of Nadal.

I had the impression that he was hitting the ball ON THE RISE indicating that at age 28, never having made it to a Grand Slam final or had ever taken a single set from Nadal, he had elevated his game to near perfection. His cross court backhands found incredible angles and his down- the- line shots were deep, crisp, powerful and precise. 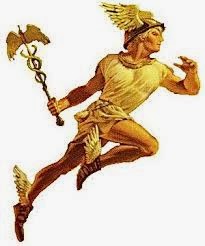 Mercury/Hermes, the messenger of the gods

Here was a Mercury rising.  (Click here for my blog on  Dr. Reginald Weir, a nearly forgotten black tennis star, another Winged Mercury- a man way ahead of his time)

Nadal was off balance most of the first set.

Leading 5-3 and on serve in the first set, Stan fell behind 0-40 and he appeared to be faltering.

To my absolute amazement, Stan rallied back to rattle Rafa by taking the next 5 points with the latter unable
to return a serve successfully on the court!!!! (suddenly...the tail was wagging the dog).

To start the second set, with Rafa serving, Stan continued his unbelievable forward momentum by breaking a near exasperated Rafa at love--extending his consecutive point streak to nine. (it finally ended at 12!)

Awesome is the only word to describe what I was witnessing...

There was no doubt in my mind that Stan was poised to win this match for the ages.

Rafa never really recovered from his injury and though he temporarily  rattled his opponent to win the third set, Stan held firm to take the fourth set, the match and his march into glory.

Congratulations to Stan Wawrinka who is now number 3 in the WTA rankings behind Djokovic at number 2 and Nadal, who maintains the number one position. 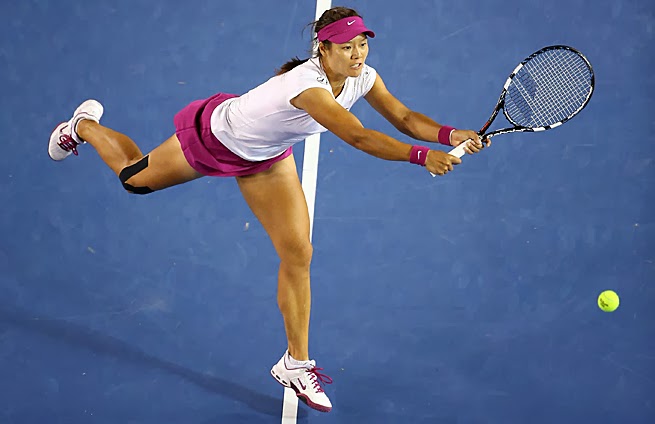 Kudos also to thirty-one year old  Li Na who after making it to the Australian finals for the third time since 2011, finally clinched the title by beating the less experienced  Dominika Cibulkova easily in two sets, 7-6 (3), 6-0.

She now rises to number 3 in WTA rankings passing Sharapova and landing just behind Azarenka. Serena Williams still retains her number one position though she exited in the fourth round.

Finally, many thanks to ESPN for their excellent early morning live coverage, to IBM for their superb techno-graphics for analysis and to ausopen.com, the official website for the open,  for their  free live coverage of both singles and doubles matches.

It was a pleasure to watch live streaming the mixed doubles team of American Scott Lipsky and  Chinese Zheng Jie advance to the semi-finals, by upsetting  Groenfeld /Peya, the number one seeded team, 2-6, 7-6 (5) {10-5} 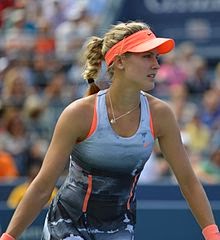 Eugenie Bouchard at the US Open 2013
Courtesy of Wikipedia

Last but not least,  it was a delightful surprise to behold a future female top star in the making, the Canadian teenager Eugenie Bouchard. This talented lady beat the 2008 French Open winner Ana Ivanovic in the quarters only to be bested by a much more experienced Li Na in the the semis.

She plays with all the poise and maturity of an accomplished player and has an Open Future on her horizon.

Next, onward and upward to the  French Open and then, of course Wimbledon and then finally  the US Open.

Posted by Richard Schwartz at 12:46 PM No comments: 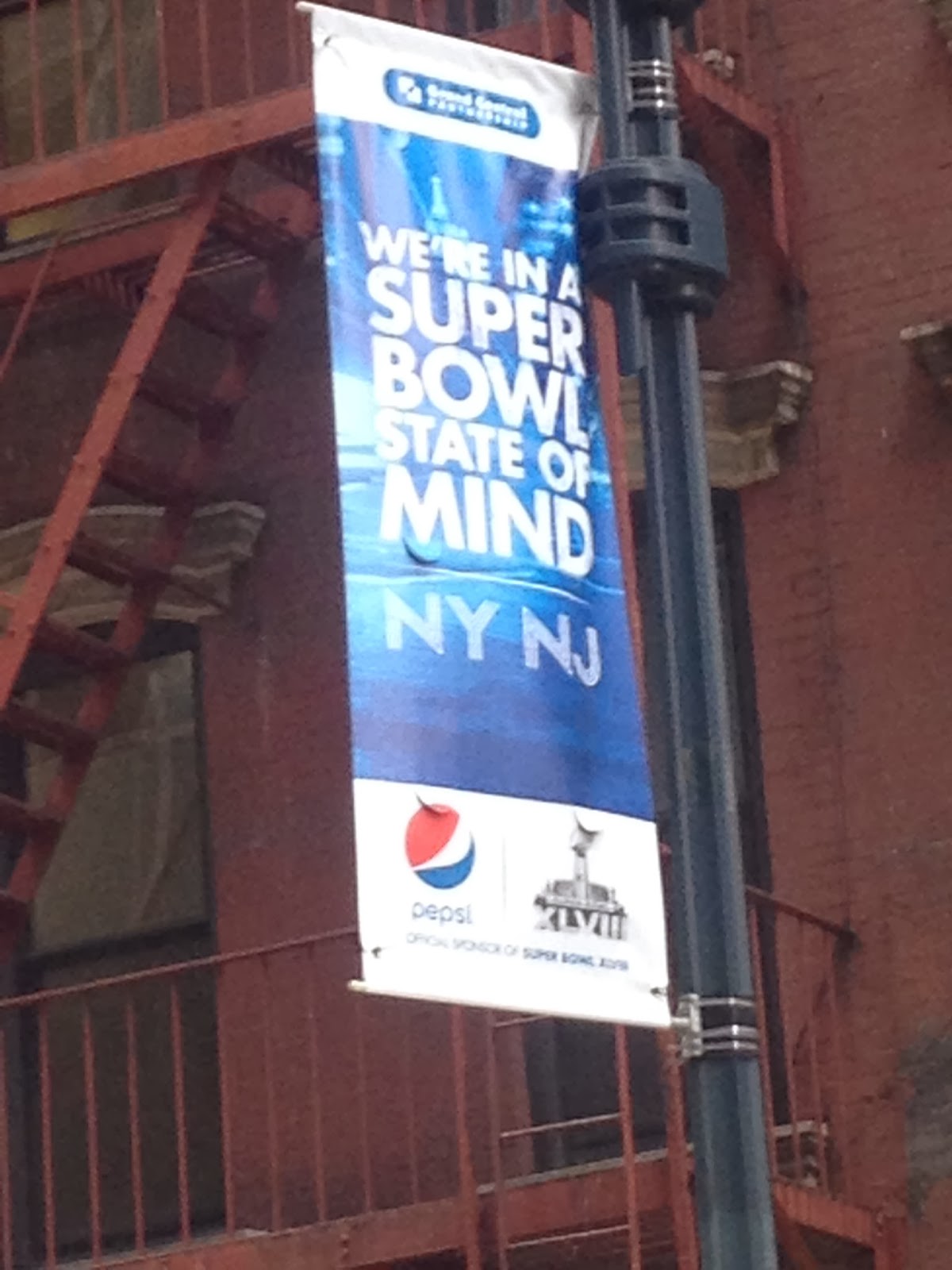 Super Bowl 48 will be held this Sunday at Met Life Stadium in East Rutherford, NJ starting at 6:30 PM.

The Bowl site is less than 20 miles from Grand Central, yet the City is in a great position to reap  benefits with so many tourists in town for the long weekend.

Of course, Met Life stadium, the NFL, the  AFC and players will also do well with the sale of tickets, parking, food concessions, merchandising and the big one, the huge bundle paid for TV rights.

Many advertising firms will do very well for their creative work especially with TV ads selling for over $4 million for 30 seconds; this translates to $133,000 per second!

The City will draw millions in revenue and everyday there is a some media hype. Yesterday was Superbowl Media Day when thousands of media people got to ask the players just about any question they wished.

Here are some more posters around Grand Central from the GCP. 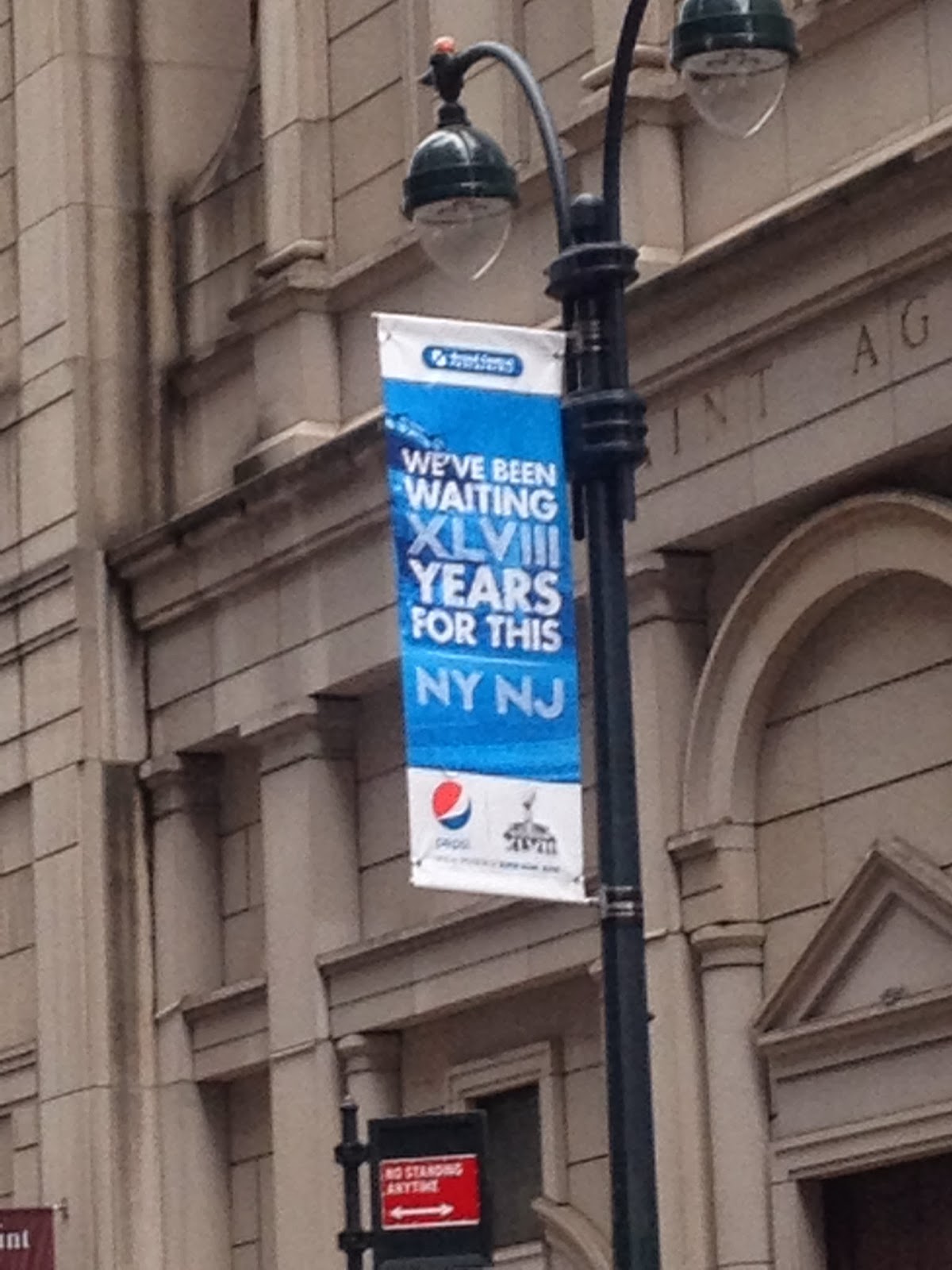 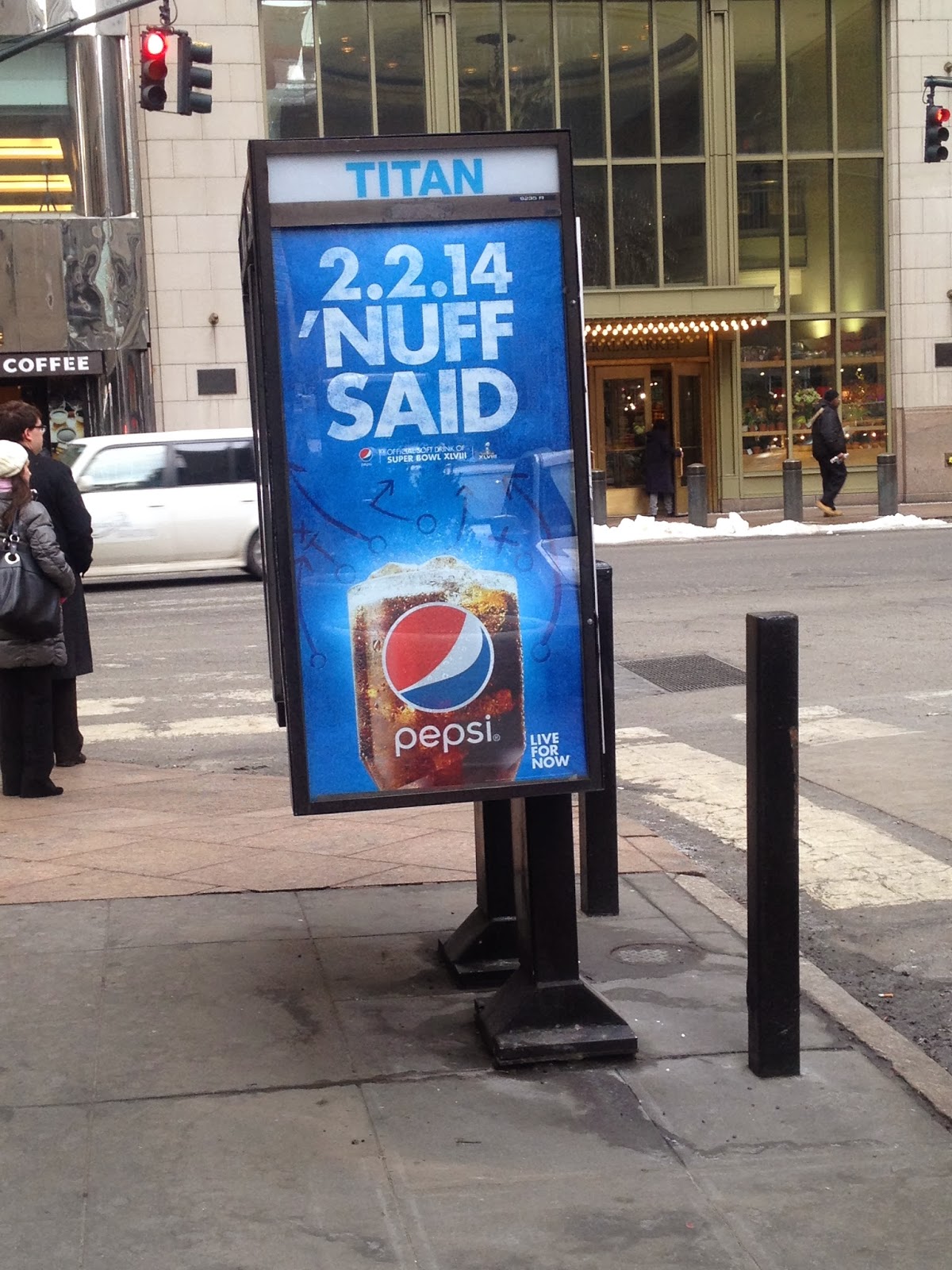 It will be a classic match  featuring  the favored Broncos versus the Seahawks, the clashing in the styles of the quarterbacks  Manning and Wilson and, very much in the MIX OF COMPETITION, it will be New York, the MEDIA capital of the USA--if not the world-- versus New Jersey for prestige, power and payroll. (The revenue stream is over $300 million this year!).

Let's all share in this awesome experience!
Posted by Richard Schwartz at 9:29 AM No comments:

Our State of the Union on the eve of our President's address to our nation.

As our President counts down to the 3 final years of his second term, here are three major issues that we as  a nation must begin confronting ASAP: 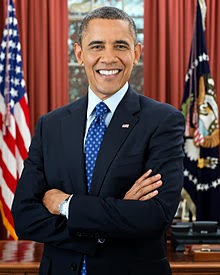 1. Our  Elementary to High School educational system  is imploding

Specifically, in a prior blog, I discussed why the urban student need not fail.

I have come out in favor of our government mandating universal free pre-kindergarten education. Where tried, this has boosted student passing rates significantly, which in turn has increased student moral and motivation. Fewer students, do indeed drop out never to get their degree.
We then can direct more motivated students to careers in health, informational technology and science where vacancies are being filled by recruiting candidates from other countries.

2. Immigration reform and border control is direly needed.
First, we are a nation of immigrants.

When there are tens of millions of  undocumented illegal residents  living, working and raising families in our cities, it is time for both parties to bury their hatchets and seek compromise. Ways must be found to allow these workers the opportunities and responsibilities that come with becoming American citizens.

3. We must deal with Climate Change.
From the devastating aftermath of  hurricane Sandy to our present day arctic vortex weather plunging over 90% of our nation in subfreezing temperatures, we are being forced to build up defenses against future occurrences.

But these measures are only dealing with the consequences and not with root causes.

I have recently  blogged  about the need for President to take unilateral executive action in the absence of getting congressional bilateral unity. (See: Combating Climate Change: do we really have two strikes against us? )

AND IT WORTHWHILE REREADING THIS ARTICLE TO GAIN AN UNDERSTANDING WHAT IS AT STAKE HERE--THE OVERALL HEALTH of OUR NATION AND THE PHYSICAL, MENTAL AND SPIRITUAL WELFARE OF EACH INDIVIDUAL THAT OUR CONSTITUTION WAS SET UP TO PROTECT. CLICK HERE TO LINK TO THE ARTICLE.

Good luck, Mr. President, in getting these tough issues in front of the American electorate.

You may not win passage of bills--during your term--on ANY of these three issues.

But, above all, you will have started an important dialog with the American people, EVEN AS THEIR ELECTED OFFICIALS ARE GRIDLOCKED,  that will continue to be debated in future administrations.

Hopefully, they will be destined  for passage--BEFORE IT'S TOO LATE!
Posted by Richard Schwartz at 5:05 PM No comments: 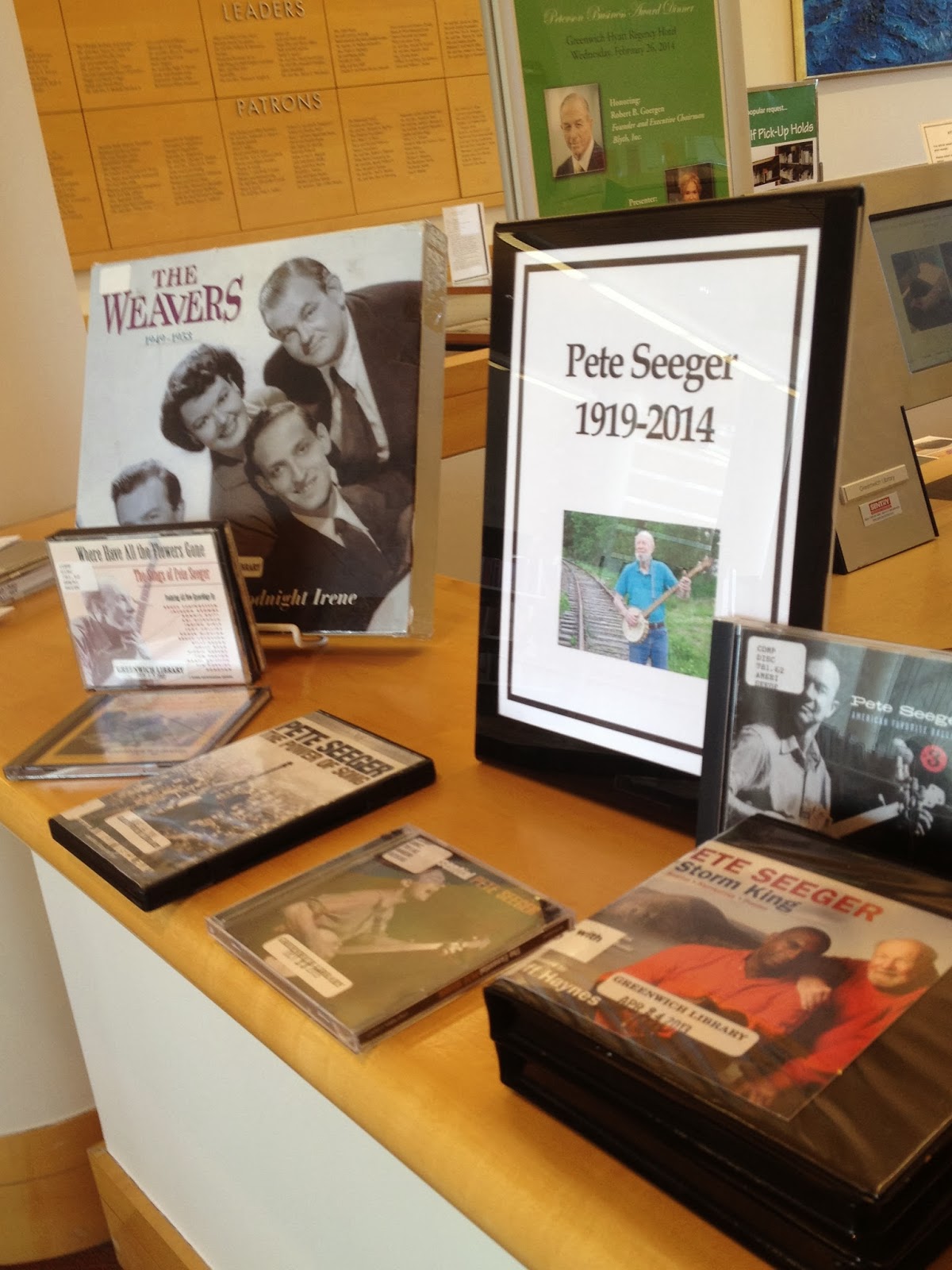 Greenwich library tribute to Pete Seeger
on display at 9:45 AM, this morning

Kudos to Greenwich Library which opened up this morning with a most timely memorial display for a great performer and dedicated American singer, Pete Seeger. 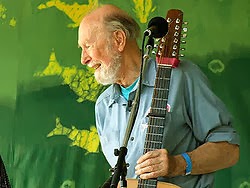 Posted by Richard Schwartz at 3:17 PM No comments: 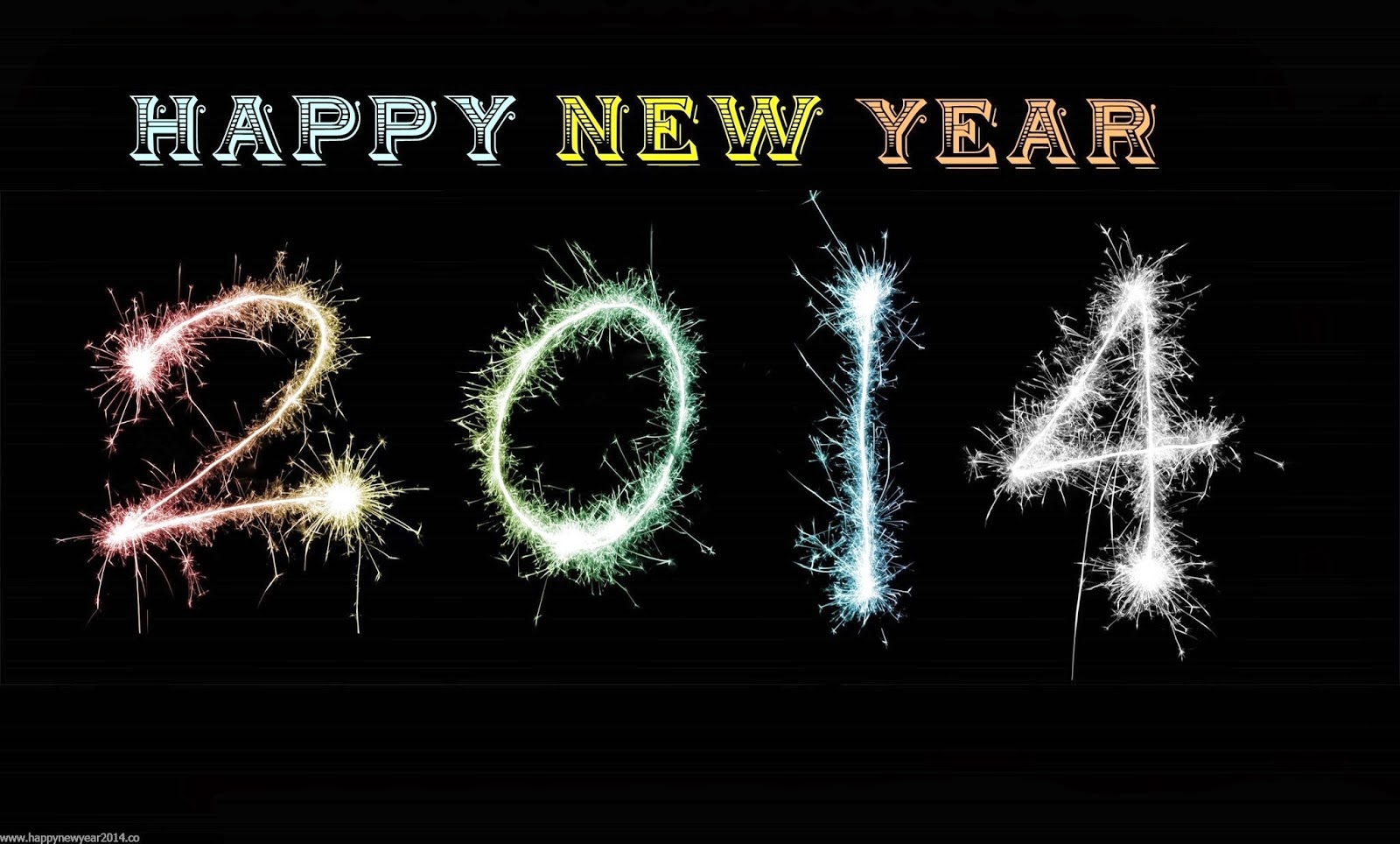 And many, many thanks of gratitude to all of you
Who prayed on my behalf while I was in ICU at Yale New Haven Hospital.

I am proud to say that my voice which has failed me for the last 7 plus years
is now returning making 2013 a wonderful and AWE- inspiring transitional year.