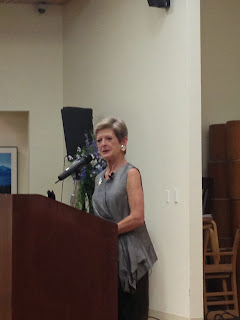 In her informative and entertaining presentation at the Ferguson Library Tuesday evening, Ms. Nugent laid out her case for both the enduring and civilizing value of a liberal arts education and the reasons for attending one of the 600 plus small private colleges in the United States.

She went on to earn her Ph.D in Classics at Cornell; then she taught at Swarthmore, Brown and  Princeton.

She has the credentials to be an Ivy League President, but elected to be President of Kenyon College, a small top-rated liberal arts college with only 400 students in each class.

Although she has strong affiliations with Ivy League institutions, it is not hard to imagine her strong attraction to Kenyon which sits on 1200 acres and where "it is hard to tell where the Kenyon College campus ends and where the small downtown begins."

She referenced a recent survey in which 71% of those polled indicated that civility is on the decline and 51% felt that civility continues to decline.

She first discussed the meaning of civility (Latin civis, "citizen") in Greece of the 5th century; It was in the nature of Greeks to live in the city. Socrates was perhaps the foremost philosopher of the era. 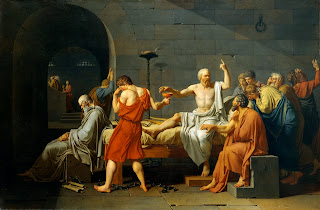 The Death of Socrates by Jacques Louis David, 1787
at The Metropolitan Museum of Art
.
The questions he  posed to the youth of Athens in the agora concerned how to live the virtuous(arete in Greek) life; in other words, how can one achieve one's potential?  He asked them questions such as what is justice, what is the best form of government and what is the best life.

The unexamined life is not worth living exclaimed Socrates as he refused to bow to the authorities and admit he was corrupting their youth. He drank hemlock and perished giving up his life in defense of his core principles.

True civility is not a live- and let- live proposition; it is not taking a whatever attitude and walk away.

True civility is confrontational. (more on this in Part II of this subject)

Socrates' student Plato catalogued his mentor's teaching in his Apologia.


Aristotle, Plato's student studied civility from the point of view of the polis (Greek for "city"). His motto was that "man is a political animal."


President John Adams, the second leader of our country
courtesy of Wikipedia

Our founding fathers Adams, Jefferson, Madison, Hamilton- all studied the classical writers and foremost in their minds in establishing our republic was writing a constitution of laws that would promote civility. It is important to keep in mind that their education was in institutions such as Harvard, Yale, Columbia and Princeton which were primarily divinity schools.

Implicit in their thinking was that only citizens living a life inspired by biblical and classical precepts would possess the necessary preparation and skills to form a government and then enter public office to lead the republic.

Ms Nugent then linked the modern day liberal arts education to the classic teaching of Greek and Roman philosophers and the political philosophy of our founding fathers.

She concluded her talk by doing some myth-busting.

1. A liberal arts education is only for the elite since terribly expensive. In fact 40% of liberal arts students come from lower income households. There is substantial financial aid and the net cost is the same as that of public schools. 28% liberal arts majors graduate without any debt .

Kudos to Dr. Nugent for an excellent presentation.

P. S. There are still some major unanswered questions that I will simply   pose now; but know, dear reader, they must be dealt because the very survival of our global community depends on our duty, as Americans, to know in depth the history of other civilizations, especially the avowed strength and power of  China.

For instance, a major issue is whether the liberal arts education in a small private college setting will be more conducive to a rational civil  non-polarizing discourse between opposing parties than a similar program on the stage of a public university.

A second issue is whether Dr. Nugent can team up with another speaker we heard in Stamford's Civility in American series--  ex-Senator Olympia Snow of Maine.  (As you might remember from my prior blog, that amidst congressional gridlock, she abruptly quit her reelection campaign to focus on solving the near stalemate intransigent polarization that has beleaguered Congress)

And finally, why should NOT two other major global forces- the Islamic and Chinese cultures (including each one's  history, major influential writings, art and music ) be included in the so-called Core Course curriculum (click here for background) introduced by Columbia College nearly 100 years ago?

Have they not proven that they merit serious study--in light of major turbulences of the first 13 years of the 21st century-- and discussion alongside  traditional Western Civilization courses?

Posted by Richard Schwartz at 1:37 PM No comments: 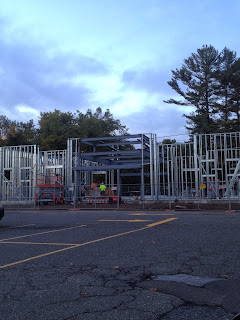 As I drove by the Newfield Green Shopping Center about a week ago, just shortly before 7 AM, I espied workers erecting the framework for the new Chase Bank which will adjoin the Grade A Market.

This is the fourth Chase branch in our community.

There was talk that the Grade A was planning to expand into a superstore and take over the Chase location which was occupied by the Dynasty Szechuan Chinese restaurant.

Welcome to Belltown,  Chase.
Posted by Richard Schwartz at 10:18 AM No comments:

A New Big Kid is coming to town: Now hiring in Stamford for its newest location: Trader Joe's is a comin' soon 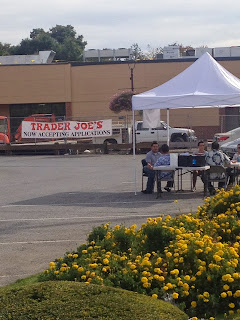 About two and a half years after Borders Books sadly closed its doors at its High Ridge Road location in Stamford, workers have been busy finishing the transformation and fleshing out of the skeleton of Borders into a unique grocery shopping venue.

This past week Trader Joes has been actively hiring personnel  under an open canopy in the High Ridge Center parking lot adjacent to its new location.

The fifty- five year old chain began in California and has over 470 stores, most of which are in the Golden State. Its nearest store is in Darien.

The Supermarket activity is heating up in our community.

Just two years ago, The Fairway Market opened up in the South end.

The High Ridge Road area near exit 35 already has a number of established markets: notably the A&P store adjacent to the Merritt and Mrs.Greens located on the opposite side of High Ridge just south of its newest competitor.

It looks like Mrs. Greens is gearing up for the competition.

I made a recent visit to the store and there is a major revamping of its aisles.

Word is out that Mrs. Greens is planning a new store in New Canaan.

Prepare  for an exciting holiday shopping experience.in our community: we will have so much to choose from. 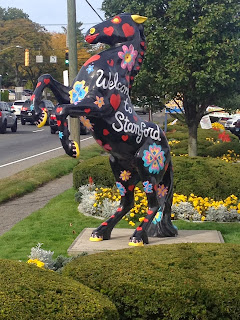 Kudos to the Symposium sponsored by Stamford Achieves at the Ferguson: Why the urban student need not fail and how to remedy a failing education system 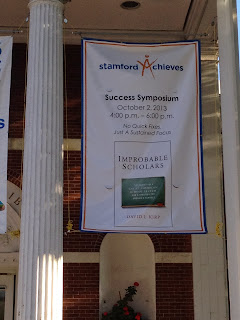 At last Wednesday night's Success Symposium, hosted by Stamford Achieves, Ms. Sylvia Abbati, Asst. Superintendent of Union City New Jersey's school district said that in the High School's General Education the pass rate had been 30% for students (excluding limited English proficiency and  special needs students). This past year, the pass rate had jumped up to 70%. 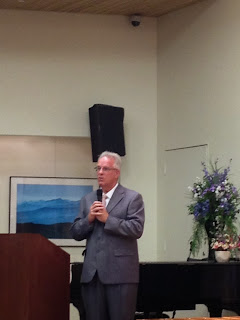 Stanley Sanger Superintendent of Union City, NJ Public Schools
He has been at the helm for the last 12 years and 40 years in the district

Mr. Stanley Sanger  the Superintendent of the Union City school system presented the audience with some amazing numbers. 97% of the children are Hispanic, 34% are English Language Learners, 12% are special needs and 45% are at risk.

The keynote speaker, Dr. David Kirp, who has written a book on the success of  Union City Schools, told a room full of educators and guests that the community's  High School graduation rate is currently an astounding 90%;  this compares with a national average of  75%.

25 years ago, Union City had the second worst graduation rate in New Jersey--just behind Camden.

What are the secrets of the Union City model?

1. The consistency of setting a rigorous core of standards and a skilled teacher that engages the students in the learning process so that he/she not only learns facts but can analyze and synthesize these facts through the process of higher thinking.

Learning by rote is being replaced by learning through doing: computer interactivity, drawing, acting projects, etc.

This process begins in pre-k and is developed incrementally, systematically and  consistently through elementary school to high school.

2. Retention of personnel. Out of 993 educators in Union City, only 3 left last year. Clearly teachers are getting results, are given recognition and excellent remuneration.

Joshua Starr Stamford's previous superintendent, an outside hire, left after only 6 years at the helm in 2011. Winifred Hamilton, a 40 year veteran of the district was appointed Superintendent starting in the fall of 2013 after serving as interim appointee at the helm for two years.
3. Strong Central leadership:  the members of the Union City Board of Education are appointed--not elected.

This is indeed controversial, but has proved successful.

Lining up Board members who are united in thinking can achieve amazing success. Many a school district falters because of division, dissension and the playing of politics. (see my blog on the bitter friction between Greenwich Superintendent of Education Sidney Freund and his board of education and his subsequent resignation after only five years.)

This dissension trickles down from the board to the Principals, then to the APs, to the teachers and ultimately the students suffer.

Union City has the formula and hopefully this will inspire other schools systems such as ours to rethink its current practices and long term vision.

Posted by Richard Schwartz at 5:14 PM No comments: 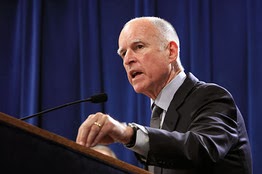 "The rest of this country will have to stand up and take notice.
No longer are undocumented people in the shadows. They are live, well and respected."

But is he really advocating driving licenses for the approximately 1 million undocumented immigrants in California, but not in the U.S. legally?

The response is yes; however, there are many restrictions.

California is indeed the first state to issue licenses to those eligible for work permits under a new policy by the Obama administration.

Immigrants could work in the US for two years without fear of deportation; they would be able to use those documents they received through this federal program as proof of legal residence with which to obtain the license.

Exclusions apply:  they would have to be between the ages of 15 to 31 and have arrived in this country before the age of 16. Estimates are that only 1 in 4 would quality

The licenses, once granted would have many restrictions: they could not be used to fly, to obtain voter registration or to receive benefits.

The key question still stands: Will the roads be any safer?

Although those applying will have taken a driver's test, what percentage of those not owning their own cars will be driving with insurance?

The licenses will be issued starting in January, 2015.

Posted by Richard Schwartz at 10:46 AM No comments: 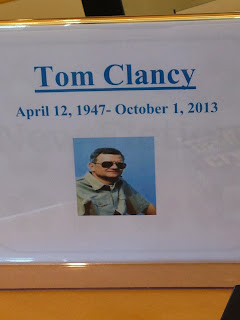 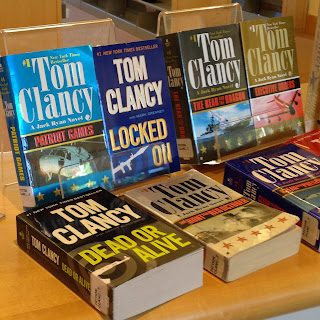 Posted by Richard Schwartz at 7:35 PM No comments: