Our hearts go out to the losses suffered by the extended Badger family.

To relive the events as they unravel puts all of us in the shoes of the two survivors.

It is incumbent upon us to ask two vital questions!

How did these events occur?

And more important: what can we do to prevent such a tragedy in the future?
Posted by Richard Schwartz at 2:50 PM No comments:

Yesterday afternoon, I received an email from the New York Times to the effect that I had cancelled my subscription. (In fact, I had requested no such thing!)

To keep me as a subscriber, the paper offered me the next 16 weeks at a 50% savings. In order to prevent cancellation, the letter urged me to call an 800 number!

Well, I started calling immediately and I kept getting a busy signal from about 2PM until 6PM.  I assumed it must have been a mistake and planned to call in the morning.

This morning, I read an email from the Times with the heading Correction. It urged me to disregard yesterday's email which had been sent by error and apologized for any confusion created.

According to a Reuters article at Yahoo news, the error was an in house one.

The email should have only been sent to several hundred people and an employee error initiated the email to over 8 million readers.

I'm glad the situation has been rectified.

Happy New Year to all.
Posted by Richard Schwartz at 11:41 AM 1 comment: 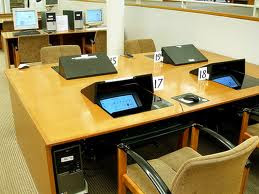 
The machines were so slow, so hard to read--as if peering down into a microscope.


About a month ago, Bennet installed about 20 new Sony computers- flat screened and and fast, too.


Not only do they occupy the area where the old computers had been, they also occupy the opposite wall as well.


I sat down at one and it was a pleasure to use. 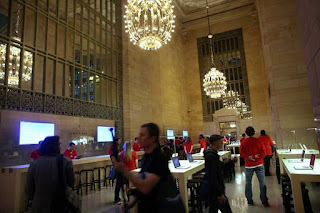 The New Apple Store at Grand Central Terminal
With minimum fanfare Apple has opened its newest store early in December.

It is located on the east end of the upper level of Grand Central Station (and even continues down part of the north side as well!)

(I happened to be at GCT 4 days after the official opening and thought it a good idea to make a visit for the 20 minutes before I was due at my train.)

Standing on the main level below and casting your eyes upward, you would never know it's there.

No signs are posted. You simply climb the stairs at the east side and voila you are there.

Dozens of red- shirted Apple employees are ready to serve you.

Upon entering the mezzanine area, one is impressed by the numerous plain tables devoted to interactive demos of apple products ranging from iphones, ipads to MacBook Pros.

The red shirts are busy swiping credit cards through their smart phones.

It was about 4 PM and there appears to be hundreds of consumers milling about.

Since it's a fully open air retail facility, I wonder what happens to all hundreds of display models at closing.

Lara Lang
Andrew Harrer/ Bloomberg News
What is the future of the magazine business?
With the appointment of Lara Lang as the new CEO of the company that publishes 21 magazines-- including Time, People, Sports Illustrated and Fortune-- we can get a glimpse of the direction the company will take in promoting its titles.

First, her background is not in advertising sales or traditional publishing. She was CEO of Digitas, the digital arm of multinational ad giant Publicis. Here she focused on designing ads on websites that are geared to getting immediate responses (by clicking on offers). She thus could bring hard core results and data to the advertiser by tracking the reader's interests.

It used to be that advertisers were happy to run ads for their products in general interest magazines such as Time or Life. Buick would run an ad for its latest model even though most readers would not have the slightest interest in purchasing the model and thus merely flip through the ad pages.

This ad model has changed dramatically with the introduction of google ads where advertisers target an audience of 'interested' potential buyers based upon cookies that have been inserted on the computer of the user.

Magazines were formerly in print versions (brands) only.

Now more and more magazines have applications for the ipad and other tablets. So magazines are now placing more current content- such as up-to-the minute videos and stories online so the reader doesn't have to wait a week to read these late breaking stories.

The new online version of the magazines, presents a golden opportunity for advertisers to display their brands. So for instance, live coverage of the Indy 500, whether in Sports Illustrated or Time, affords automotives the right venue to get their message out.

Does this spell the end of print magazines as we have known them?  No!  They will continue to thrive so long as they have branded themselves into new digital versions to supplement their traditional format.

How well Miss Lang can effectuate this model for Time Inc. awaits to be seen.

What I've Been Reading Lately: Bernhard Schlink's The Reader 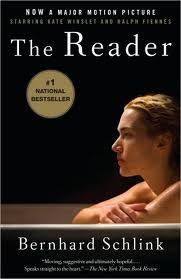 This novel held my attention from start to finish!

At its end, it left me with unanswered questions.

Michael Berg is the protagonist and early on he has an affair with Hannah Schmidt a ticket collector on a tram in a West German City.  This is no 'ordinary' liaison as he is 15 and she is 38; their love making is preceded by bathing.

She often insists he read to her from the classics like The Odyssey and Chekhov's The Lady with the Dog at the start of each meeting.

Of course, Hannah is controlling of their relationship and is at times verbally and physically abusive.


Then one day she disappears. Michael is uncomprehending of her split and is hurt.


Seven years later, he catches a glimpse of Hannah during a war crimes trial he begins attending as part of his Law School coursework. She is a defendant along with a group of female SS guards who served at a satellite camp near Auschwitz. They are tried for allowing 300 Jewish women (they were escorting on a death march?) to perish in a fire while locked up in a church.

Michael is astonished when Hannah appears to take full responsibility for the deaths; she is also accused of writing the account of the fire. (She first denies the latter and quickly changes her plea when she realizes she will have to give a sample of her handwriting.)

It is then that Michael realizes Hannah's secret--she is illiterate. We also learn that Hannah sheltered the weak women at the camp and had them read to her before they are sent to the gas chambers.

At this point in the narrative, I invite my reader to grab the novel and discover yourself the surprise  ending and the answer to some of the following questions.

1. Does Hannah get convicted and does she serve time?

3. Does she show remorse for her complicity in crimes she may have committed? Is she granted some type of absolution?

4. Does Michael reconnect with Hannah during or after the trial?

5. How does Michael deal with the moral issues of having had a close/loving connection to someone who committed war crimes? (He confesses "the pain I went through because of my love for Hannah was, in a way, the fate of my generation, a German fate...")

6. How has Michael's relationship with his wife and children been affected by his love for Hannah?

6. How does the author deal with the collective guilt that Michael's generation has towards the complicity of his parents' generation in the holocaust?

Posted by Richard Schwartz at 11:11 AM No comments:

Betty Hass Pfister (July 23, 1921- November 17, 2011) was a pioneering female aviatrix. She won the All Women's International Air Race two times and was a member of Women Airforce Service Pilots (or WASPs) during World War II.

While a student at Bennington College in 1940, whe was smitten by the urge to fly during an airshow; despite remonstrances by her dad not to fly, she paid her dollar " and squished into the seat" for a chance to fly on a small plane.

She cut a deal with her dad that if she stayed in college, he would pay for her flight lessons.

After graduation she joined the WASPs. Male pilots were sent overseas, so an opportunity arose for her; she began to ferry planes from factories to airports or ports where they would be shipped overseas.

Betty Haas Pfister with her  P=39 Fighter
After the war she worked as an aircraft mechanic; then, with over 1000 hours of flight time, she became a stewardess with Pan American.

In 1950, she won the All Women's International Air Race from Montreal to West Palm Beach Florida;  then, in 1952, she again won the race in a flight from St. Augustine, Florida to Welland, Ontario.

She was very proud of her P-39 a surplus fighter airplane that she named Galloping Gertie. She later earned her helicopter license and said she would rather fly "an hour in a helicopter than 100 hours in an airplane."
Image source (1)
Posted by Richard Schwartz at 1:32 PM No comments: