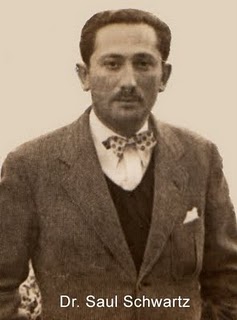 My Strongest Role Model and Mentor-
My dad in the 1940's, New York City
My passions stem principally from following strong role models in my life.

At the time  I came under the influence of each of these people, they exuded a love of their calling, a mastery of their area of expertise and a patient, caring, desire and ability to transmit their knowledge to me. They were living proof of a high professional code of contact.

My father, Dr. Saul A. Schwartz MD was a clinical researcher and published writer in the field of stomach diseases (gastroenterology) who performed clinical studies on celiac disease along with Dr.Jerzy Glass at New York Medical College beginning in the late 1960's. His work has been referenced in the world's most respected  medical journals such as The Lancet (established 1823).. Dad influenced my brother Gabriel, a graduate of Princeton and Columbia Physicians and Surgeons to join the research team.

Indeed, Gabe went on to publish hundreds of research papers on internal medicine,  celiac disease, epidemiology and renal physiology. Click here to read a recap of my brother's life before expiring of Lou Gehrig's disease in 1989.

It was thus natural for me to develop a respect and love of the sciences, notably, biology, chemistry, physics and earth science from both my dad and elder brother.

Dad also collaborated with Dr. Felix Wroblewski MD, a noted internist who practiced  medicine at the Cornell Medical Center in New York. (the latter arranged for me to study one summer at the Pathology Department at Tel Hashomer Hospital in Israel.)

Whatever Dad undertook, he set a standard of the highest excellence. First he excelled in sports earning varsity letters in field and track, baseball and basketball. (click to read blog). He began his medical career at age 23 as a general practitioner, specializing in gynecology; he delivered all of my siblings as well as all my cousins who lived in the East Tremont neighborhood where we all grew up.

Another fixture in  our neighborhood was Dr. Jonas Salk, the founder or the Polio vaccine and dad not only was friends with him, but attended lectures and medical conventions with him.

He somehow also found time to lead study groups at the local synagogue on Medicine in the Bible.

First off, My mom, loved poetry and literature and could quote William Shakespeare and John Milton sonnets by heart (especially John Milton's sonnet number XIX When I consider How my Life was Spent)  lead and attended study groups on the Bible at the local Synagogue (her Psalms course was and continues to be applauded by her students) and wrote me extended letters encompassing Torah wisdom and  guidance when I moved out to California.

No doubt, my parents were natural leaders and teachers in their fields and were instrumental in my passion for teaching religion and science at all levels.

My introduction to tutoring began as I turned 15. Rabbi Aaron Blumenthal of Congregation Emmanuel in Mt. Vernon, NY tapped my Hebrew Day School background at The  Ramaz School to teach some of his slower students the essentials of reading and writing Hebrew. These skills I continued to use 45 years later when I taught Jewish history, religious holidays Aggadah and ethics to seventh and eighth graders as well as the trope (cantillations) necessary for chanting their Bar and Bat Mitzvah Torah and Haftarah portions. 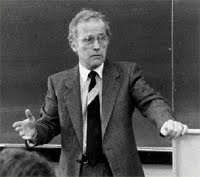 Professor Edward W. Tayler teaching
a class at Columbia University
Professor Edward W. Tayler, The Emeritus Lionel Trilling Professor of the Humanities at Columbia University continues to be the model of excellent teaching for me. I was influenced by him when I began pursuing my studies in 17th Century English Literature (click here to read my blog on Professor Tayler). His rigorous combined  socratic- dialectic and platonic pedagogic techniques inspired me to pursue a multi-track career in teaching literature, religion and science.

His strong guidance in the writing of my master's thesis on John Milton's Samson Agonistes gave me the confidence to tackle the religious, often enigmatic yet semi-autobiographical poetry in this tragedy (e.g. "O dark, dark, dark, amid the blaze of noon, irrecoverably dark, total eclipse without all hope of day!")-- written by this blind 17th century towering figure steeped in his knowledge of the Old and New Testament and internecine Cromwell- led civil war and politics of his era-- a veritable master of erudition and words.

Above all, Milton tried in his major works, despite his own infirmities, to establish a stable order in the commonwealth by not only writing political pamphlets but by also serving as secretary for foreign tongues (like a secretary of state) from 1649-1663 acting (and writing) as chief spokesman for Cromwell as lord protector.

Special mention must be made about my teaching ESL first at Hudson County Community College (West New York, New Jersey) and then at Jamaica High School. (Queens, NY). The College experience was particularly rewarding as I was dealing with a group of young adults, aged 20-40.  Recent immigrants from South and Central America and eager to fit into the American workforce (many had daytime jobs), they were so appreciative of my effort to teach them the rudiments of our language and culture.

We made use not only of language lab tapes, but also of the daily newspapers, The Bergen Record and the New York Times. I had the students cut out articles and then we would read them aloud, discuss the language usage and then the ideas presented. It was an intense 6 week course, 6 hours per week. The last day was marked by the students hosting a pot luck dinner in my honor. The dishes represented native cuisine of Guatemala, Santo Domingo, Peru, Columbia, Chile, etc. 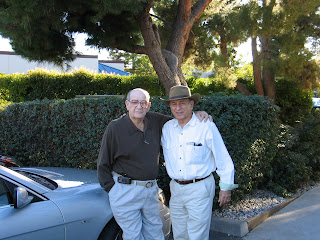 One  of the strongest role models in my life
That's Jack Sanoff and I in November 2010
in San Ramon, CA, Celebrating  our 40- year relationship
Jack Sanoff under whose wing I learned the art of salesmanship and staff management was and continues to be my mentor of some 40 plus years now. Jack and I discovered each other in the early 70's in the San Francisco Bay area. Jack was VP and General Manager of Mark-it List Publications. Jack patiently taught me how to market myself as well as my product, space sales in the TV Movie News distributed free of charge all over the USA. Through his efforts and my determination, I rose over the next 10 years to be regional manager for the Dallas Fort Worth and then the Washington, DC- 5 state  areas. In our nation's capital, I was in charge of hiring, training and motivating two separate sales divisions consisting of 30 people.  (click here to learn about Jack--this marvelous man and role model) 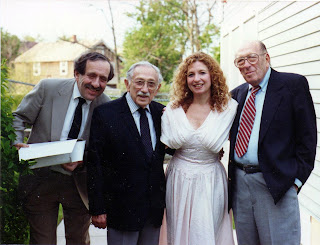 My Uncle Irving on the right, flanked by my
cousin Carol, my dad and brother Mike (from right to left)
Irv was a powerful influence on me and passed on at
age 96
Finally, my passion for  innovating was inspired by other role models, such as my recently deceased uncle Irv Schwartz (1910-2006) whose electical contracting business enters its ninth decade in New York City under able leadership. He always encouraged me to discover my own passions, to do my own thing (in publishing Brooklyn's Community Magazine)  never stop trying, experimenting, refining technique. "You are the best salesman I have ever seen," he would say, "you could sell the Brooklyn Bridge"  not fully aware of the academic, managerial and communicative skills I have accumulated.