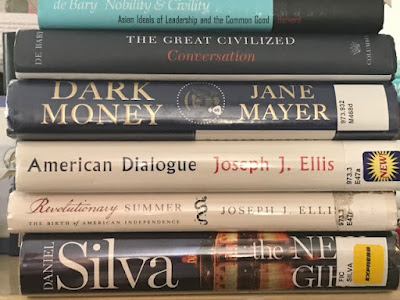 Hello AVID SUMMER READERS:  We still have 30 days left to the summer of 2019 with its warm, balmy, humid days and precious nights (for reading of course), so its high time  to discuss, briefly my choice for the first of three reading lists.

My overriding concern is not to bore you with detail but spread out a broad philosophical panoply of ideas that begin about 2500 years ago.

The underlying theme is to start locally, to urge, encourage and educate every resident of our country, every Elhi  student--not just University attendees--  to understand, relate to and appreciate other cultures besides our very own.  In so doing we become more tolerant of the 'other;'   We learn to converse, even collaborate cooperatively and civilly with other groups, religions, sects, genders, people of other skin colors, political beliefs, languages,  etc.

There's no end to this butterfly effect.

In short, I am promoting multiculturalism and urging that we expand what we now call the Core Curriculum, traditionally limited to Greco-Roman and Judaeo-Christian texts and ethics....to include Arabic and Islamic, Near and Far East Asian, African and Native American cultures

And as we meander, I present texts, along with ideas, songs, poems, movies and works of art  to support, when appropriate, my thesis of inclusion.

We begin in my next post by examining  the Founding and underlying  political and philosophical principles, feverishly and passionately discussed, argued and debated by our country's early leaders who helped draft our constitution. 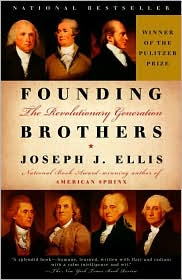 So, shall we meander to...... first,.The Founding Brothers by Joseph Ellis (winner of the Pulitzer Prize in History)--  chosen because the book demonstrates  how our country's early political leaders were successful at burying their hatchets and learned the art of collaboration in order to cement the union of 13 fragmented colonies.

We begin with our own American Culture because we are now a veritable amalgam of so many diverse peoples (e.g.Jackson Heights in Queens, NY has over 70 different languages spoken.)  Then,  let's learn  how our long-established idealized democratic way of life is threatened and  corrupted through dark money.

We then journey back millennia to discuss time-honored sino- inspired formulae for national leadership, peace, order and stability outlined in Nobility and Civility and The Great Civilized  Conversation written by  Professor Ted DeBary.

Before his recent passing, he was the nation's foremost living scholar of Far Eastern Cultures.

He  taught at Columbia University for nearly 60 years during which I was privileged to spend a year under his brilliant tutelage. 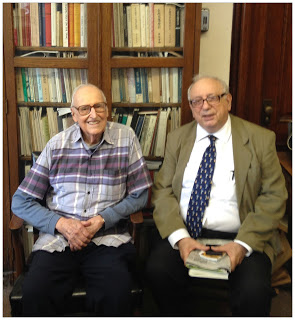 This photo was taken at 502 Kent Hall in 2014, fifty three years after I took his Asian Humanities and Civilizations course co taught with Professor Ainslie Embree  (1921-2017). He autographed his last book The Great Civilized Conversation which he presented to me

So let Ted's wisdom and insights infuse our Great Conversation --the one on the values and benefits of a multicultural core curriculum-- and continue to be an inspiration to our generation as we continue his odyssey of discovery.

Finally, we will take a summer detour, with novelist Daniel Silva, and experience fast-paced global terrorism in the The New Girl.

So, I ask you to suspend some long-held beliefs and join me on a thought provoking, at times challenging and exciting,  life changing odyssey that never ends as we journey back and forth in time.
Posted by Richard Schwartz at 1:29 PM No comments: