Kim Clijsters at the 2011 Open GDF Suez
(courtesy of wikipedia)
She has won three US Open titles.
She has has 41 career titles.

Tonight,  Kim Clijsters played her last singles match tonight as she bowed out in the second round losing to 18 year old Laura Robson of Great Britain 7-6, 7-6.

Laura, a southpaw with strong ground strokes has come a long way in the two years since I saw her compete in the junior tournament at the US Open.

Indeed, Kim has enjoyed a fantastic career as she graced and dominated ladies tennis for the better part of this past decade.  She was the role model for so many younger tennis players such as Laura.

Thank you, Kim and we know you will be a standard bearer of the game for years to come.


Posted by Richard Schwartz at 3:05 PM No comments: 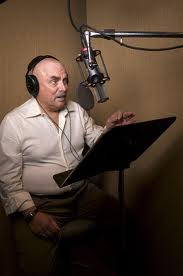 Don Lafontaine at the mike
(courtesy of The Huffington Post)
Donald Leroy "Don" LaFontaine (August 26, 1940-September 1, 2008) had the resonant voice that introduced over 5,000 film trailers that often began with the phrase "In a world...."

He also did hundreds of thousands of television advertisements.

As LaFontaine tells it, his voice cracked at the age of 13 in the middle of a sentence and his voice morphed into the bass tones that made his famous.

Here is a short You Tube video hosted by Don himself. Enjoy.


Posted by Richard Schwartz at 7:49 PM No comments:

The White Tiger by Arvind Adiga is a highly recommended book 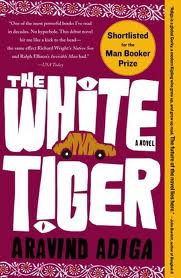 This powerful novel set in modern India caught and held my attention from start to finish.
Told over seven nights and addressed to the Chinese premier (about to visit India), this first person narrative tells how a proud and immoral Bangalore 'entrepreneur' rose from poor humble beginnings in a   small backwater village on the banks of the Ganges to become a moneyed taxi fleet owner.

It is a tale that asks us to suspend nearly all judgments as we watch this poor, but brilliant lad use his eavesdropping ways to learn the secrets of the rich to overturn them at their own game.

As driver for his master, the less than swift son of a local don, the narrator kills his boss, robs him of hundreds of thousand of rupees (used to bribe New Delhi officials) and flees to become an entrepreneur elsewhere. The protagonist acts though he knows that the practice of the dons is to kill off his family in retribution.

The book admirably depicts the vast divide in living conditions between the rich and the poor and the utterly corrupt ways of the rich. One of the book's messages is that in such a corrupt brutal society, it is somehow okay to kill your oppressor to reap social justice. (Indeed, there are a litany of injustices in the book.)

Here are some memorable quotes:

"Now G.B. Road is in Old Delhi, about which I should say something. Remember, Mr. Premier, that Delhi is the capital of not one but two countries--two Indias. The Light and the Darkness both flow into Delhi. Gurgaon, where Mr. Ashok lived, is the bright, modern end of the city, and this place, Old Delhi, is the other end. Full of things the modern world forgot all about--rickshaws, old stone butildings, the Muslims."

"Wonders of the old city--a row of open sheds, and big buffaloes standing in each shed with their butts toward you, and their tails swatting flies away like windshield wipers, and their feet in immense pyramids of shit."

By the way, our narrator is called by his village school teacher a white tiger--"the creature that comes only once in a generation." He is indeed the brightest student in his school.

The book is a great read. Enjoy!


Posted by Richard Schwartz at 3:26 PM No comments: 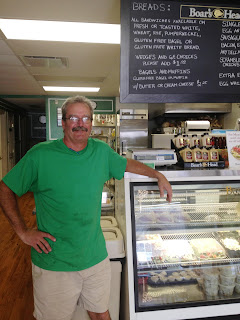 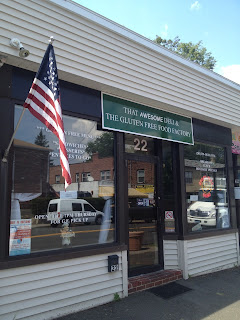 With over 20 years of restaurant experience under his belt, Eric Screnock has just opened up full service  adeli in Belltown that specializes in gluten free dishes.
Among the gluten free entrees are lasagna, eggplant parmesan, chicken parmesan and macaroni and cheese. He plans to expand the number of entrees in the future.
He became involved in this cuisine because he has prepared gluten free dishes for his wife for the last 15 years.
The deli is open Monday to Saturday 6:00AM to 3PM and until 7PM on Thursday for gluten free pickup.
Good luck, Eric. 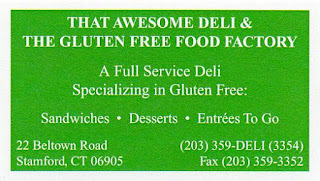 Posted by Richard Schwartz at 3:14 PM No comments:

The performance began with Alexander Glazunov's (1865-1936) Oriental Reverie for Clarinet and String Quartet. Though the music is melancholic , the central addition of the clarinet, does liven up the tempo and engages the listener.  As the concert program notes "the language of both Tchaikovsky {a great influence on Glazunov} and Glazunov works is highly emotional, personal and direct..."

Scott Feiner a 15 year- old precocious composer introduced the  "World Premiere" of his Ozark Dance for String Quartet.  In Scott's own words "the music has a folk dance quality, sometimes bluegrass, and sometimes Irish folk music. Both styles owe a lot to the squealing of fiddles."  He continues , "What I wanted was to tame and polish that squeal."

I found Scott's piece both entertaining, captivating and refreshing, particularly due to the virtuosity of the Lumina string players. Judging from the applause after each of the four pieces, the audience concurred with me.

In 1871, Moscow was infatuated with Italian opera music. Tchaikovsky felt some was good and some not so good. So, he wanted to introduce the intimacy of  chamber music with pieces by Glinka, Liszt and Schumann.

The First String Quartet was written for a concert featuring Tchaikovsky's own compositions. The music is beautiful, haunting and captivating. Andante Cantabile, the second of four movements, features unforgettable melodies. It is based on a folk song heard by the composer on the Ukrainian family estate of his sister, Alexandra.
Posted by Richard Schwartz at 12:29 PM No comments:

Daniel Silva's latest book The Fallen Angel is a winner Chalk up another winner for Daniel Silva.

The characters we have grown accustomed to from his other books are all here. Gabriel Allon, famed art restorer, his beautiful wife Chiara, Ari Shomron, Gabriel's mentor, Uzi Navot, Monsignor Luigi Donati , private secretary to the Pope, Eli Lavon....

It's only by luck that I am able to pen this report.  My position was number 7 on a library hold list and I thought I would have to wait 8 weeks to get my hands on a copy. While at the Ferguson library, I espied a rare copy on the 7 day express rack; I then grabbed it and devoured it in 2 days.

From the moment  the novel begins-- with the discovery of the mangled body of  a Vatican curator thrown to her death beneath Michaelangelo's awesome dome-- to its conclusion deep under the Temple Mount in Jerusalem-- the novel is a non-stop rush of adrenaline.

Gabriel is swept into a plot where he discovers the dead woman had uncovered a dangerous secret involving stolen antiquities used to fund a jihadist organization set up to foment cataclysmic global unrest and terror.

Enjoy the novel and know that it debuts this weekend #1 on the New York Times,  Wall Street Journal and Puslishers Weekly best seller lists.