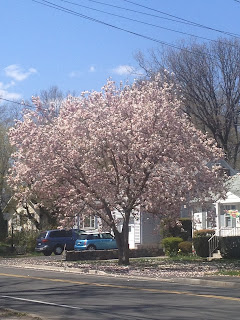 The groundhog supposedly saw his shadow...

We were supposed to have an early spring....

And finally, we are beginning to have a taste of spring color!

Posted by Richard Schwartz at 7:28 PM No comments: 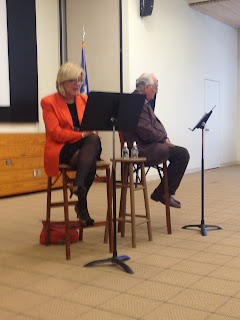 In this Pulitzer Prize nominated drama, two lifelong friends sit on chairs next to each other, never glance at one another and read from their scripts- the letters, notes and postcards they have exchanged over a lifetime.

The stage is bare but for the two characters:  Andrew Makepeace Ladd III and Melissa Gardner.He is a staid accomplished lawyer and senator and she is a troubled, unstable recognition- seeking artist-- with a drinking habit.

Both are products of well- to- do families.

After meeting in second grade, they start their correspondence; then they are sent off to boarding school and continue writing from college, he from Yale and she from Briarcliff.

He goes on to become a successful lawyer, gets married and is elected to the US Senate. She attends a number of schools, gets married, has children and loses custody.

Their attempt at romance at first did not click; Yet, their letters spanning a period of 50 years is perhaps the one given constant in lives that are out of sync with one another. They share their emotions-poignant yet sensitive- their frustrations, failures and successes.

This play was staged by M&M  Productions Acting Company which recently performed  God of Carnage at the Ferguson. This performance of  Love Letters starred Karen Quinn as Melissa and Frank Panzer as Andy.

Once again, thank you Ferguson for a most entertaining afternoon!

Posted by Richard Schwartz at 8:44 PM No comments:


This past Sunday Elliot and Doris Weiss delighted the audience at Ferguson with beautiful, inspiring and enchanting renditions of Roger's music.

Rogers wrote over 900 songs and the music for 43 shows.

Elliot and Doris gave us a sampling. Some of the more memorable ones are the waltzes, Lover and Falling in Love with Love (performed on the video clip above).

We look forward to their next performance in the fall.
Posted by Richard Schwartz at 9:17 PM No comments:

The New York Times and the Heast Connecticut Newspaper Group weigh in and depict poverty and education in Greenwich : Part II

In my previous blog, I touched on the main points of the New York Times Sunday April 14th article on the educational advantages those children living below the poverty line have in attending schools in Greenwich.

She had been living in Stamford with her mom and child and at 18 was told by her mom she had to leave with her child. She wound up in a Stamford shelter for two years. She then arrived in Greenwich in 2003 during the construction boom and was paying $50 a month in rent.

She found work cleaning a mansion on North Street and then  fell in love with Keith and had three more children in four years. While she worked by day, he took care of the children; he then worked nights at the local Stop and Shop.

We sympathize with her as she must get a new engine for her used Cadillac, pay $2500 for flood damage she caused in her complex, has Keith leave due to fights and quits her job to be a full time mom.

Despite her troubles, "Chelsea loves sending her kids to Greenwich schools" where the "classrooms are filled with technology and textbooks instead of gangs."

Not surprisingly,  Bridgeport-Stamford-Norwalk  is number one in US metro areas ranked by inequality.

The divide between the haves and have-nots, between the very comfortable and low income residents  is contrasted by an article on page A8 of the same Sunday April 14th edition. The byline reads "Retired Stamford Hospital surgeon lives life to the fullest." It is the saga of Sherman Bull, who has climbed to the top of Mount Everest and and also reached the highest peak on seven continents.

Does not  that article-- just pages away from the lead story-- remind us of  the vast economic divide that exists in Fairfield County?

The overriding question is how can we bridge the gap?

Posted by Richard Schwartz at 4:44 PM No comments:

The New York Times and the Hearst Connecticut Newspaper Group weigh in and depict poverty and education in Greenwich: Part I 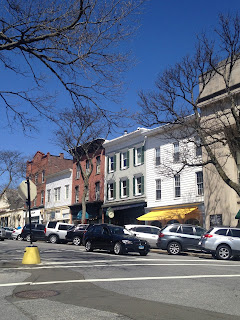 
The Sunday editions of the April 14th New York Times Magazine and the Stamford Advocate have enlightened us on  how great the divide is between the rich and poor  in Greenwich (The Times)   and on the struggles of a low-income income Greenwich resident  to send her kids to the town's schools (The Advocate).


In The Other Greenwich, New York Times writer Adam Davidson reports that nearly 4 percent of the town's population of  about 61,000 live above or below the poverty level. These people mostly labor on the estates as cooks, housekeepers, landscapers, etc.

Though these workers can get cheaper rents in Stamford and across the border in New York, many opt to rent units above the stores on Greenwich Avenue and in small low income apartments built after World War II.

What motivates these parents is that their kids "have everything-music, sports, art,drama." They are even taught ice-skating.

A Rand corporation study concluded that "the poorer children in wealthier schools cut their achievement gap in half compared with their peers in poorer schools."

Here are some amazing stats to ponder: in Greenwich where about 13% of the students come from low income homes, "more than three-quarters of those students scored at or above proficiency on the most recent statewide 10th -grade performance tests. At nearby Stamford High School, where nearly 70 percent of students are on the lunch program, almost half the students failed to meet the proficiency levels."

So why don't more school districts integrate their schools on an economic basis?  According to studies, about 80 school districts with a student population of 4 million already do. However, this figure only represents about 10 percent of all students in the U.S.

What this article fails to discuss in detail is just why rich school districts have greater success than poorer ones. Is it because of the wealth of the parents, the stability of the families, the quality/stability of the schools or a combination?

Davidson's enlightening article is an apt prelude for the Hearst Newspaper Group's five-part series on Poverty and Riches,; the first installment presents a bio of a impoverished single mother with four children struggling to raise them in Greenwich.

I will cover this news story in my next blog.
Posted by Richard Schwartz at 12:58 PM No comments:

Steve Berry's The Paris Vendetta is an entertaining read 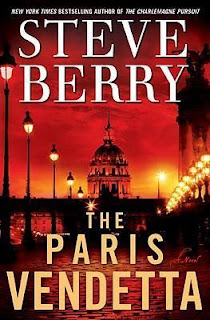 
If you are interested in a thriller novel that intertwines Napoleonic history with an adrenaline rush entailing modern day themes, then you will enjoy this book.

First is the adventure of locating  a supposed hidden treasure that Napoleon had stolen and acquired from palaces, the Vatican, national treasuries and the Knights of Malta.

Secondly, A cabal called the Paris Club, composed of multimillionaires (and organized by  Eliza Laroque whose family has a vendetta against Napolean), is bent on manipulating the world economy.

One of its members, Lord Ashby, is hell bent on locating the treasure. He also happens to be a a double agent for the US government.

Enter an ex- Justice Department operative named Cotton Malone. His close friend Henrik Thorvaldsen, a super-rich Dane industrialist, is determined to kill Lord Ashby who masterminded a plan that killed the Dane's son. Henrik also manages to become a member of the cabal.

Malone is warned by his former boss of  a mysterious undercover group that he is to stop the Dane's mission of revenge.

The novel plays out in Denmark, England and then Paris and depicts the conflicted Malone who must balance loyalty to his friend with his need to thwart the cabal.

The reader is in for many exciting scenes-- one in which a master terrorist remotely directs a plane at the Eiffel Tower to take down the entire Paris Club during its 'secret meeting.'

This book is my introduction to Steve Berry's novels, Malone and other characters who appear works.

I heartily recommend this novel.
Posted by Richard Schwartz at 3:27 PM No comments: