In its second weekend since opening, Time Magazine reports that  Jurassic World has garnered over $981 million in global box office gross according to Box Office Mojo.

The film is slated to reach the one billion dollar mark this Thursday, less than two weeks after its release.

What an amazing run! (Watch out Furious 7, which reached the billion dollar mark in 17 days)

40 originally designed and painted fiberglass dinosaurs are on display for free viewing throughout the summer months.

Here are examples from the Downtown art exhibit: 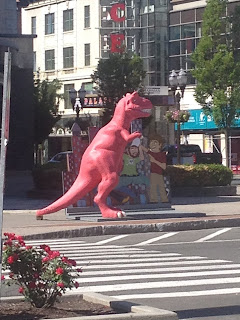 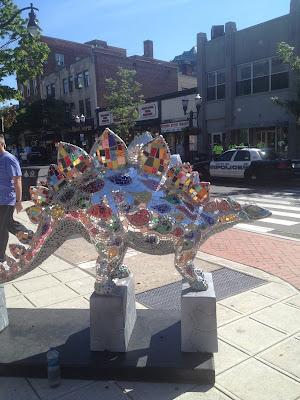 Posted by Richard Schwartz at 9:45 PM No comments:

In Celebration of the 150th Birthday of William Butler Yeats, Perhaps the Greatest Poet of the 20th Century. 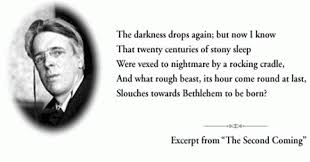 My introduction to William Butler Yeats (June 13, 1865 - January 28, 1839) was as a Freshman at Columbia College. Alan C.Purves, my English instructor, assigned our class Yeats's  Second Coming to explicate.

The first stanza was very disturbing to say the least. It begins with a disruptive image of a falcon not being responsive to its trainer, the falconer and


Things fall apart; the centre cannot hold;
Mere anarchy is loosed upon the world,
The blood-dimmed tide is loosed, and everywhere
The ceremony of innocence is drowned.

The poem was written in 1919 at the end of  the "blood dimmed tide" of World War I and "anarchy is let loosed" as the the Russian Revolution has gripped the attention and toppled the stability of the world.

My appreciation of Yeats was greatly enhanced by studying some of his great poems under the aegis of Professor William York Tindill of Columbia University's Graduate Faculties English Department.  He brought the rhythms of Yeats's poems alive by reading significant passages out loud.  His favorite was September 1913 and his favorite lines:

Romantic Ireland's dead and gone,
It's with O'Leary in the grave.

The poem was occasioned by the lockout in September 1913 of employees by the employers and merchants of Dublin. The poem also pays tribute to those early Irish revolutionaries and  patriots who tirelessly devoted their lives to the futile cause of creating a free Irish Republic;

Here is a video animation of Yeats reading September 1913:

Other Yeats poems that I suggest one read include: Adam's Curse, The Lake Isle of Innisfree and The Wild Swans at Coole.

Yeats won the Nobel Prize for Literature in 1923.

Posted by Richard Schwartz at 2:42 AM No comments: