Remembering the March for Freedom and Jobs-- lest we forget 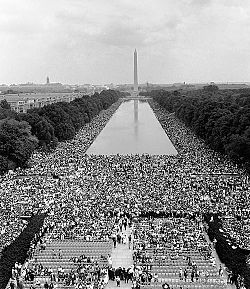 View from the Lincoln Memorial to
The Washington Monument on August 28, 1963
(courtesy of Wikipedia)

It was an historic milestone in American History!

On  August 28, 1963--100 years years after Lincoln's famous Emancipation Proclamation-- a minimum of 200,000 (probably upwards of 400,000) Americans marched along the Capital Mall to the Lincoln Memorial.

Their purpose was to demonstrate peaceably for enhanced civil rights for the many forgotten, abused, persecuted, tortured and lynched black citizens of our country.

This is a must see documentary--The March--directed by James Blue and produced under the auspices of the United States Information Agency.

This is the link.

Posted by Richard Schwartz at 11:43 PM No comments:

A US Open first: Tennis fans in Armstrong root for underdog Montfils--still Isner rises to the occasion 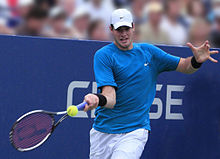 In what must be described as a US Open first, hundreds of tennis fans erupted and rose in their seats  shouting out "Let's go Mon-fils, Let's go MonFils"  in an effort to ignite his game.

His game revved up and he took the third set 6-4.

The momentum continued into the fourth set and he appeared to be getting the upper hand.

Isner was beginning to show some pain in his groin area and undoubtedly was baffled by the 'partisan crowd' (for his opponent).

However, the six foot ten inch tennis marvel (ranked 17th in the world), bore down on his serve, hitting consistent aces timed at over 135 MPH--often coming to net and finishing the point with brilliantly hit volleys that eluded the lanky, quick moving six-four French wonder.

Indeed, Montfils is a fabulous retriever and a pleasure to behold, fleet as a jaguar in motion.

Yet, John hung tight and bested the Frenchman in a fourth set tie breaker at 7-6 (4).

In a post match interview, Monfils commented that following the French Open where he gets strong fan support:  "Here [the US Open], it's the most after Paris. I always say here is my second home."

The match ended just short of 12 AM and was exciting to watch.

Good luck John-- who next plays the 22nd ranked Phillip Kohlschreiber in the third round.

Posted by Richard Schwartz at 5:50 AM No comments:

Two years without the Tennis Channel: the dispute between Cablevision and the TC: the deeper issues.

In September of 2010 when I posted the blog, there was a cozy relationship between the TC and Cablevision (CV).

For a $4.95 fee, I was able to enjoy 24/7 access to dozens of non-major tournaments as well as the Grand Slams.

All that changed on fourth of  September 2011-- during the US Open.

CV and Vios pulled TC from its lineup during the US Open and I could no longer access Channel 399 when I most enjoyed its coverage!

It's simply, greed, greed and more greed--involving both companies.

The TC wanted to move its Channel from CV's 'premium' sports tier to basic cable.

TC wanted basic because its content would be available to a much much larger audience than the more limited sports tier.

Thus it could charge more for its advertising for indeed viewers of tennis are a prime market  for Rolex watches, Mercedes and Lexuses autos,etc.

At the same time, TC was negotiating higher fees from the CV for a vastly increased audience.

This proposal did not sit well with CV because it would lose the lucrative sports package fees it was used to reaping which presumably would far outweigh the increased fees payable to the TC.

Just after negotiating lower monthly cable fees from Cablevision after they raised my 'triple play' coverage nearly 50%,  CV sent me a bill with a brand new sports surcharge--without any announcement-- of  $2.98 per month.

CV says they must collect these additional dollars because the sports channels are asking more for content.

While it offers ESPN and ESPN 2, CV does not offer ESPN 3 which provides additional tennis coverage during the US Open.

Nor does it offer the TC as part of the surcharge.

And what I've read from recent blogs, many sports fans do not want many of these sports 'packages' such as MSG, SNY, Yes, etc.  --AND YET WE ARE FORCED TO PAY EXTRA FOR UNWANTED basic cable sports programming.

Shame on both sides for shafting the consumer in their pursuit of the dollar.

Enter the unspoken hero usopen .org website which in an effort to spread the excitement of watching top tennis offers live streaming coverage of up to six matches with minimal advertising along with PIP, match chat and match stats.

Hail to the US Open organization.


Posted by Richard Schwartz at 6:08 PM No comments:

Also, congratulations to all the dedicated acolytes of art who produced such an attractive 4-color, slick booklet entitled Downtown Abstractions. A glance at this sterling piece will make up for all and any deficiencies of my short blog. It presents bios of the 18 artists, pictures of the 43 sculptures they loaned to our city, lists of the our sponsors and a sculpture exhibit map for this show as well as for the nine permanent sculptures in downtown Stamford.

Dictionary.com defines abstract art as "A trend in painting and sculpture in the twentieth century. Abstract art seeks to break away from traditional representation of physical objects. It explores the relationships of forms and colors, whereas more traditional art represents the world in recognizable images."

I enjoyed my journey through the Downtown  (including First Stamford Place just across Metro North) and time permitting I will add more photos to the slide show. So do tune back in.

For my coverage of previous outdoor summer exhibits and other outdoor art pieces and sculptures here in Stamford click here.

And, finally, if I have piqued your interest just a little about my fascination with the power of the abstract and you have patience and a few moments more, then learn and appreciate, as I did, how a truly great 20th Century artist-- Wassily Kandinsky --brilliantly pursued the path from the concrete to the abstract. If so, then click here.

If you haven't seen the show, hurry and get out to experience all the colorful vibrant pieces. The show ends on Labor Day.

Posted by Richard Schwartz at 9:56 AM No comments:

Some highlights from the first three days of the US Open. 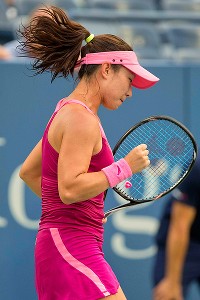 The Open begins Monday us with a shock for late arriving tennis fans.

There's a two hour wait to get in to the facility: the holdup is unheralded and due to enhanced security checks at the gates!

James Blake announces his retirement at the end of the tourney. He has entered 13 US Opens and was on tour for 14 years.

Farewell to James of Fairfield, CT and Harvard stock: he exited in the first round in a thrilling five setter against Ivo Karlovic of Croatia going the distance valiantly. The match ended in a tiebreaker--3 in all. Final score: 6-7, 6-3, 6-4, 7-6, 7-6

Serena Williams is the favorite on the women's draw. Can Victoria Azarenka or Li Na beat her?

Stephens advanced to the third round in a match that finished up at about 1AM Thursday morning;  she plays fellow American Jamie Hampton. Wow- should be some match.

The Chinese ladies are a pleasure to behold especially Li Na, Zheng Jie and Shuai Peng.  Zheng took out Venus Williams in an epic second round 3 set match that started around 1 P.M. and finally ended at 8P.M. due to rain delays (6-3, 2-6, 7-6).

This Sino-Surge is nothing less than amazing considering that 10 years ago tennis was virtually unknown in the country and interest has SURGED there since Lin Na won the French Open in 2011 against Francesa Schiavone becoming the first Chinese player ever to win a major.   (For her character and daily physical fitness regimen See the New York Times article on Li Na, China's Tennis Rebel.)

Rain delay Wednesday PM is putting the damper on everybody.

John Mcenroe HEARKEN:   your vehement protests and wishes are coming true: The USTA has just  announced plans to build a retractable roof at Arthur Ashe stadium.


Posted by Richard Schwartz at 5:43 AM No comments:

The Synagogue was founded by members of Spanish Jewish families who first arrived in 1658; they were presumed to be from the communities of Curacao and Surinam.

Cantor Isaac Touro was instrumental in its founding and building from 1759-1763; his son Judah Touro, a wealthy merchant in New Orleans left $10,000 ($250,000 in today's dollars) in his will for the Touro shul and its cemetary.

George Washington sent a letter to the Synagogue in 1790 which read in part:
...the Government of the United States ...gives to bigotry no sanction, to persecution no assistance...May the children of the Stock of Abraham, who dwell in this land, continue to merit and enjoy the good will of the other inhabitants; while every one shall sit in safety under his own vine and figtree.

Supreme Court Justice  Elena Kagan was among the dignitaries attending the ceremonies.

Touro is "the oldest surviving Jewish synagogue building in North America, and the only surviving building in the U.S. dating to the colonial era." (Wikipedia)


Posted by Richard Schwartz at 12:13 PM No comments: