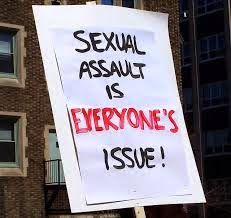 I previously recorded the hurdles facing campus administrators in dealing with campus rape and the banning of hard liquor on certain campuses. You can read the story here under 2014-2015 issues.

Now comes a new twist in dealing with the problem of campus rape.

The New York Times has recently reported that "Colorado, Wisconsin and seven other states allow people with legal carry permits to take concealed firearms to campus, some with restrictions..."

Presently 41 states have a ban on carrying concealed weapons on campus by law or by University policy.

However, many states including Florida, Nevada, Indiana, Montana, Oklahoma, South Carolina, South Dakota, Tennessee, Texas and Wyoming. have introduced legislation  that would allow guns on campus.

Of course, the key issue is whether allowing students to carry concealed weapons on campus will prevent rape.


Posted by Richard Schwartz at 9:42 AM No comments:

This blog is a continuation of my prior article on Notable Stories of 2014 Continuing to Resonate into 2015.

9. BULLYING CONTINUES TO BE A MAJOR NATIONAL CRISIS FOR ALL AGES, IN MANY FAMILIES AND IN ALL PROFESSIONS.

Here in Connecticut, Greenwich High School has responded to the suicide of a GHS sophomore following some allegedly severe incidents of bullying.

The use of social media apps such as Yik Yak, Whisper, Confide or Secret have been magnets for bullying abuses. GHS has taken steps to shut down access to Yik Yak on the school district's wireless network. This is a small first step because students can still access these networks on their own data plans.

The root problems lies with educating the parents who often are poor role models in displaying verbal, physical and mental abuse. Bullying is indeed a hand-me-down disease.

Finally, kudos to the Stamford Advocate for its publicity and the town of Greenwich's Affirmative Action Advisory Committee for holding a writing contest encouraging students to discuss whether society can bring an end to bullying.

Bullies are broken, too.

And until we can Unbreak what's Broken
and Unspeak what's Spoken
Policies and laws
are all going to have flaws.

In a late breaking story, three AITE High School students were named winners in the Network for Teaching Entrepreneurship's World Series of Innovation. They have developed an app that aids students to combat bullying, depression and suicide by contacting volunteer counselors via video chat.

College administrators have been slow in dealing with the rising reports of sexual assaults on campuses. A New York Times article highlighted the enormous hurdles facing those who do have the courage to report incidents.

It is thus encouraging to hear that Dartmouth College President Phillip Hanlon just announced that beginning March 30, hard liquor will be banned on campus for all students regardless of age. In addition the students will be required to learn about sexual violence prevention each year.

According to the National Institute on Alcohol Abuse and Alcoholism, 1825 college students between 18-24 die each year from alcohol related unintentional injuries and more than 97,000 students between the ages of 18 and 24 are victims of alcohol-related sexual assault or date rape.

Other colleges have likewise banned hard liquor on campus. They include Swarthmore College in Pennsylvania, the University of Virginia and Brown University.

It was recently reported in the New York Times that "Colorado, Wisconsin and seven other states allow people with legal carry permits to take concealed firearms to campus, some with restrictions.."
Furthermore "In addition to those in Florida and Nevada, bills that would allow guns on campus have been introduced in Indiana, Montana, Oklahoma, South Carolina, South Dakota, Tennessee, Texas and Wyoming."

The key issue is whether allowing students to carry concealed weapons on campuses prevent rape? 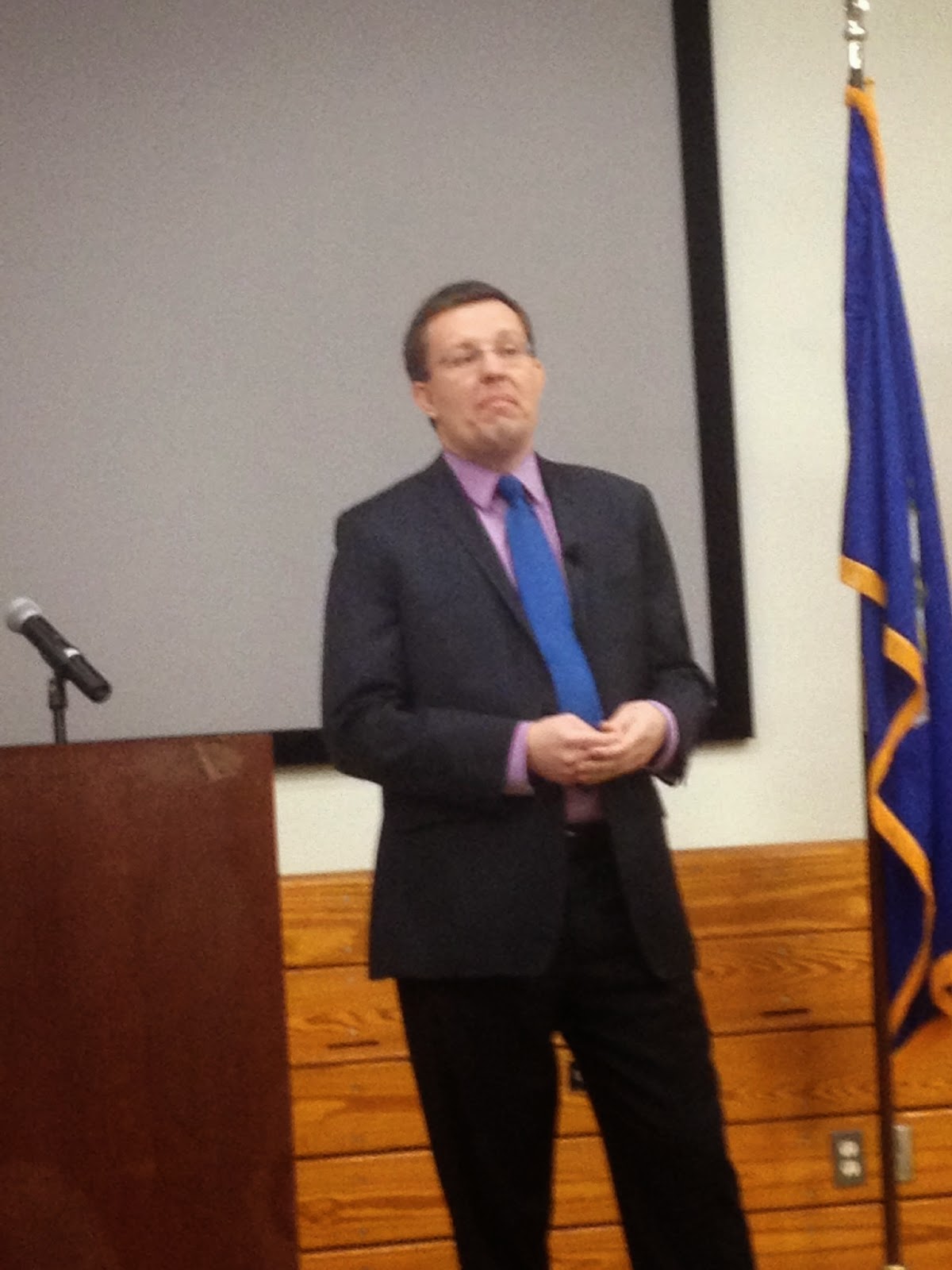 11. CIVILITY IN AMERICA SERIES AT STAMFORD'S FERGUSON LIBRARY CONTINUED INTO ITS FOURTH YEAR. The last speaker was Henry Timms  who spoke about Civility in the New Media  on Tuesday, February 10th.

Here is a summary of his speech from the Stamford Advocate. 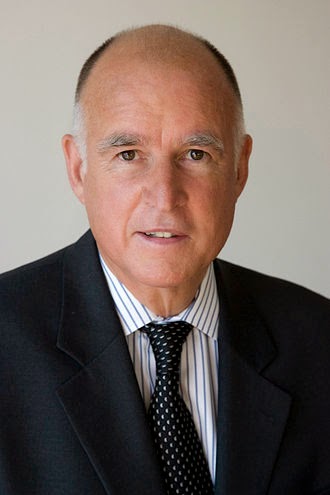 
12.GOVERNOR GERRY BROWN OF CALIFORNIA, now turning 77,  won an historic fourth term last November. He has taken a state with a massive debt of about $27 billion and turned it around so that he has a surplus. To help alleviate the pervasive drought that has plagued California, he has successfully urged the voters to approve a $7.5 billion plan that provides for new reservoirs, dams and water tunnels.
He was elected governor in 1974 and then re-elected in 1978. He served as Mayor of Oakland (1999-2007) and recaptured the governor's seat in 2010.

Kudos to Gerry for his leadership and stamina in leading the bellwether state.

Posted by Richard Schwartz at 10:46 AM No comments:

A Remarkable 2014 Biography of a Political Giant and Liberal Spender: Nelson Aldrich Rockefeller

My previous discussion of remarkable biographies of John Quincy Adams and his wife Louisa Catherine- published in 2014-  can be accessed by clicking here. 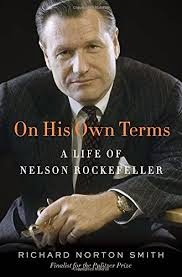 8. NELSON ROCKEFELLER IS ANOTHER 'LARGER THAN LIFE' FIGURE,
who leveraged his legacy, his unlimited financial fortune, to rewrite dramatically  political information gathering protocol and left behind a monumental architectural accomplishment.

His life was one of using his vast fortune and influence for the sake of PUBLIC SERVICE.

I am indebted to Jeffrey Frank's article "Big Spender" which appeared in the Books section of the New Yorker last year. Here he reviewed Richard Norton Smith's "On His Own Terms: A Life of Nelson Rockefeller" (Random House).

He thrust himself into government service in a big way with no strong family mentors and public service role models as had John Quincy Adams. It was thus natural for Nelson to use his vast fortune  to buy 'brain trusts' to advise him. 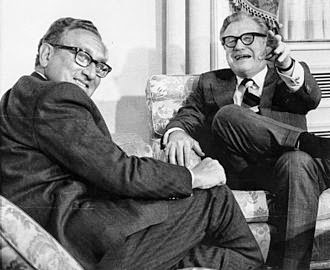 Though Eisenhower did not bestow upon him Cabinet rank for the new Department of Health, Education and Welfare, Nelson showed unflagging skills and unlimited energy as an under-secretary. Ike then shifted him over to the State Department in 1955 as a special assistant for cold war strategy. Here he surrounded himself with large numbers of paid assistants such as Henry Kissinger then a Harvard Professor and Edward Teller, the "father of the Hydrogen bomb."

At one point, Rockefeller had forty-seven (47) people on his staff. He was, in effect, running his own 'shadow' department of State which was a foil, though a weak one, to that of  John Foster Dulles, the Secretary of State. The latter commented rather understatedly and snidely  at the time that "there is growing evidence that  [Rockefeller] is going into business in a rather big way."

When he bested Averill Harriman, a scion of the wealthy railroad empire, in the election for Governor of New York State, Rockefeller continued his penchant for creating "large staffing" in the form of task forces. Smith writes that as the new governor, he "convened more than forty (40) study groups"- to consider various issues ranging from pilot safety, increasing milk consumption to the state's electric power consumption.

Smith enumerates his accomplishments; under his administration, the State University of New York grew from thirty-eight thousand students and twenty-nine schools to about a quarter of a million students on sixty-four campuses.

"The state added fifty-five state parks, more than a hundred hospitals and nursing homes, and two hundred water-treatment plants and undertook a billion-dollar highway construction program.
Health and welfare programs expanded and the new Department of Environmental Conservation, which predated the federal Environmental Protection Agency, took on such issues as vehicle emissions, mercury in waterways and pesticides." (Franks, p. 116) )

Rocky accepted, with great reluctance, Ford's invitation to serve as his Vice President (1974-1977) after Nixon was forced to resign under the cloud of Watergate. In this position he lent stability and credibility to the office especially after the forced resignation of Vice President Spiro Agnew (1969-1973) under Nixon.

He never made it to the White House because of his frequent wavering, perhaps betraying a certain ambivalence about serving in the high office. Frank says: "Rockefeller never had a realistic idea of what was required to be nominated, such as winning actual delegates." (116) 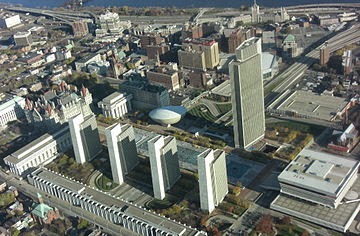 Aerial view of the Empire State Plaza, looking
eastward to the Hudson River
from Wikipedia

Frank concludes his homage to Rockefeller by discussing the vast and exorbitant construction of the Empire State Plaza also known as the South Mall in Albany. Budgeted originally at $250 million, it wound up being built between 1959 and 1976 for an astounding $2 billion. It is described as "an outsized complex consisting of government buildings and and egg-shaped performing-arts center." (Frank, 118)

Perhaps, Nelson's obsession with his Albany project was his answer to his father's building Rockefeller Center in 1930 for the more modest sum of $250 million dollars.

Rockefeller had a way, unlike
John Quincy Adams, of relating warmly to the common man.

He had the heart and conviction of a liberal-- and the means, to fulfill his notable assertion: "if you don't have a good education and good health, then I feel society has let you down."

Kudos to the New Yorker and authors Smith and Frank for spotlighting a very public figure: a man, who despite his personal foibles his too public womanizing, used his enormous financial legacy for the betterment of his fellow man.

Stay tuned for more to come.

Posted by Richard Schwartz at 11:49 AM No comments: