Those ESPN Guys: Cliff Drysdale and Pat McEnroe a Class Act at the US Open 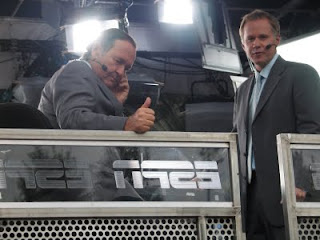 After watching the Grand Masters of Tennis play: Stan Smith, Mary Jo Fernandez, Ille Nastase, Hana Mandlikova etc., I was wandering about the grounds at the US Open; and so it was a delightful surprise to run into two of the finest tennis broadcasters in the game and to swap a joke or two with them. In the photo above that's Drysdale giving me a thumbs up for my badinage and Patrick McEnroe, the last man standing (the brother of the court terror, explosive John Mcenroe)
Here, my camera catches them during some 'down time.'
I told the obviously tired and droopy eyed Cliff and his partner that "You guys haven't put in real day's labor since you put your rackets down years and years ago (to focus on business). When are you guys going to get a real job?" This levity brought some smiles.
Actually, each of these 2 broadcasters brings a class act demonstrating his love of the game.
Drysdale was in the top ten for six years and contested in the finals of the US Open National Championships at Forest Hills against Manolo Santana of Spain in 1965. His smooth voice "combines precise South African diction with a natural ease on air that recalls James Bond engaged in a game of backgammon." (see interview in TennisWeek.com on 1/10/08) He combines his love of broadcasting tennis with his passion for developing' pied pipers': masters of the game such as Roy Emerson, Fred Stolle, Owen Davidson and Aaron Krickstein, to name a few, to create enthusiasm in spreading the game anywhere and everywhere. He says it best:
"You can grow tennis anywhere; give us a tennis facility--even in some place where no one has played tennis for a long time--and if you put the right person in charge of that place who can energize people it will catch on because it's a great game that everyone--kids, adults, men and women--can play."
In a short You Tube video, Cliff demonstrates his incisive low key analysis of the similarity of the Steffi Graff and Ana Ivanovic forehands.
John McEnroe and his brother Pat teamed up at the US Open and its very clear that Pat is as analytical as his brother and comes across like a smooth quaff on a hot summer's day: pleasant, informative and entertaining. Pat has worked hard both as a player of renown, particularly in doubles and has come into his own as a formidable broadcaster, as Captain of the US Davis Cup Squad and as general manager of the United States Tennis Association's player development program. Besides displaying his aura as a gentleman of tennis, he is a unique serious promoter of the sport.
Hats off to both of you. You guys are a class act! And great for the sport.
Posted by Richard Schwartz at 6:16 AM