What I've Been Reading Lately: Going Solo by Roald Dahl 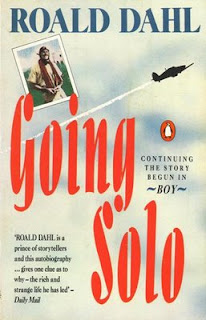 This autobiography begins in 1938 when Dahl left England aboard the SS Mantola and culminates in his experiences as a Royal Air Force Pilot ace during the war.

He was  en route to Dar es Salaam, Tanzania to work with Shell Oil on a three year contract.He describes all the dotty (eccentric) characters aboard. He then relates a bizarre encounter with a lion.

One of the highlights is when his plane crashes in Libya and he nearly dies. He does recover and goes on to become a fighter pilot outwitting and outflying dozens of German Messerschmit 109's.

The book is an enjoyable read.
Posted by Richard Schwartz at 2:38 PM