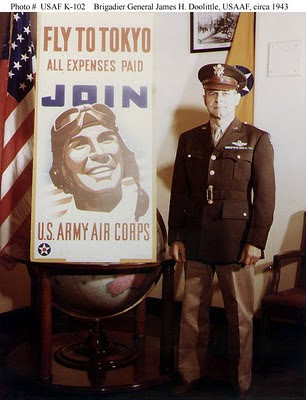 Today we celebrate Jimmy Doolittle's birthday. He was born in Alameida , California in 1895 With a PHD earned at MIT in aeronautical engineering, he gained fame as a daring aviator who restored US military morale after the devastating bombing of Pearl Harbor in December, 1941. He convinced his US Army Air Corps boss General Henry 'Hap" Arnold that he could successfully lead a squadron of B-25 Mitchell bombers on a surprise air raid over Tokyo.
So, in April 1942, 16 bombers, each with a crew of 5 took off from the carrier Hornet with Doolittle the pilot of the lead plane. He and his fellow pilots bombed factories in Tokyo and then headed for neutral China, but had to bail out to safety when they encountered fog and clouds.
None of the planes were recovered intact and all but 2 crews found safety as they all headed for China and Russia. The pilot of the #2 plane was able to land safely in a rice patty.
Doolittle earned The Congressional Medal of Honor for his bravery and went on to lead the 8th Air Force from England on bombing raids over Berlin, oil depots, munitions factories, etc.
Among his favorite quotes are:
"The Mind is not a vessel to be filled, but a lamp to be lighted."
(see Carolyn Murphy at http:// www. wikitree.com/wiki/Doolittle-1)
"If we should have to fight, we should be prepared to do so from the neck up instead of from the neck down."
"The first lesson is that you can't lose a war if you have command of the air, and you can't win a war if you haven't."
Posted by Richard Schwartz at 5:17 PM