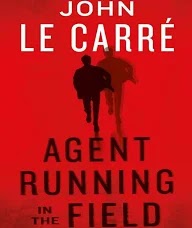 With Britain in a near state of political crisis over Brexit, Le Carre weaves together a suspenseful tale that involves the the clandestine swapping of classified information to our adversaries the Russians.

Edward Stanley Shannon, a lowly British 'clerk' with security clearance has been photocopying highly classified  documents  from Topsecret Jericho. This is a project involving clandestine negotiations between the US and Great Britain to to increase and tighten economize trade between the two countries in the wake of Britain's exit from and then being locked out of  European trade partners.

Nat is a 45 year old 'retired spook' that has been called back to head an 'office'-- a spy operation that seems of little importance.

He is also reigning Club Champion of a Badminton club in Battersea. Here, he meets a shy, self effacing 25 year old Ed who as an unranked player and hence unknown player challenges Nat to a match. Nat rather surprising accepts and beats Ed handily

And so begins a casual relationship centered around a sometime weekly match  and a few beers afterwards.

They each have a vague idea what the other does for a living.

I suggest you read the novel to fill in the details (a hint: like Peter Guilliam in a Le Carre's previous novel, Legacy of  Spies who is implicated in the shooting of Alex Leamas and his girl friend  Liz Gold at the Berlin Wall, Nat must answer for treason in aiding and abetting a Soviet Spy.
\
Enjoy, Le Carre at his best.


Posted by Richard Schwartz at 3:57 AM