The Ferguson Library Bookmobile is a Stamford Tradition: It's Worth a Visit When it comes to your Neighborhood

The Ferguson Bookmobile has a history spanning over 70 years. It first made its appearance in the late 1930's and appeared like the one pictured below. 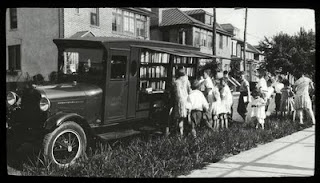 The sides of the vehicle would open up and people would come to browse the books which were neatly placed on bookshelves. It was a great way to bring the library to communities,  especially to the children. Turn of the River, Belltown, Glenbrook and North Stamford communities that benefited from the local visit; after all the city had only one library at that time.
Sometime in the early 1940's, the Bookmobile was upgraded into a vehicle resembling a tiny school bus pictured below. 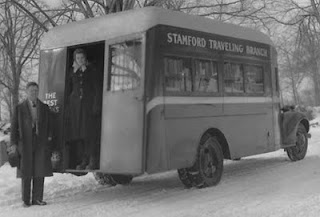 A Stamford resident sent Ferguson Library this photo for its archives. It was taken on Webb's Hill Road off of Long Ridge Road during the winter of 1942 when he was 6 years old.   He says he remembers "the excitement of the arrival of the bookmobile and going up inside. Somehow the shelves would be pulled down and opened up, but I don't remember the details."
Today the Bookmobile can be seen in its latest incarnation all about town.

Last Wednesday, I was able to catch up with the Bookmobile as it was parked at the Glenbrook/Shop-Rite Center from 12:15 to 2:15. The rains from tropical storm Lee had just let up and I stopped at the Bookmobile just to check out the latest offerings.

What a surprise I was in for!

I was delighted to find the latest in fiction, non-fiction and DVDs and the staff friendly and helpful in locating items.

I quickly found a copy of Senator Joe Lieberman's just published book The Gift of Rest: Rediscovering the Beauty of the Sabbath, John Grisham's latest novel, The Confession  and the Coen brothers cult movie A Serious Man, on DVD.

The schedule for the Bookmobile through January 2012 can be found on the Ferguson website.

So, in these extremely difficult economic times, take a moment to patronize this valuable free resource when it visits your neighborhood and keep a Stamford legacy going.