3/3/66: The Birth of the Buffalo Springfield Group amidst LA Gridlock 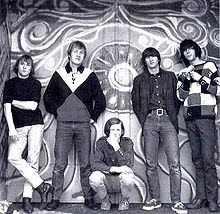 Michael Douglas (Falling Down, 1993) plays an unhinged man who commits violence after abandoning his car in a hot summer day's LA freeway gridlock.

I recall many an early morning, smog -filled trip on Route 5 as I traversed, snail-like, the 55 mile trip from Woodland Hills to Santa Ana area. The traffic at 7:30 AM was so heavy, the smog kept getting progessively thicker as we crawled most of the way and I inevitably began to doze off as my Mercury passed the exit to LAX. The trip was interminable and seemed to last forever!

Enough to unwind someone with unsteady nerves...so early in the day.

So, it came as a surprise and delight to learn that such a gridlock traffic jam on Sunset Blvd. on this day 44 years ago today brought together an amazing band that became the Buffalo Springfield.

Neil Young had set out for Los Angeles to hook up with Stephen Sills. After spending a week in LA looking for Stills, he was just about ready to head up to San Francisco.

Stuck in traffic on Sunset Blvd. in his white van , Young along with Au Go Go Singers alumnus Richie Furay and record producer Barry Friedman suddenly spotted Young's 1953 Pontiac hearse driving by in the opposite direction. They made an illegal u-turn and pulled alongside Sills and they all jumped out into the street. After hugging and shouting at eachother, the four knew they had to unite in putting together their band.

About a month later on April 11, 1966, the new group debuted at The Troubadour in Hollwood.
They called themselves the Buffalo Springfield after a steam roller parked in front of Friedman's home with the name Bufallo Springfield Roller Company on the side.

The rest is his history.
Image source(1)

Posted by Richard Schwartz at 10:14 AM