...And the winner of the Citizen of the Year Award goes to Bob Dilenschneider and Stamford's Mayor Michael Pavia

"There is no man that embodies civility, decency and love of country and community more than this man."

These words of praise for the creator of the concept of Civility in American Series, Bob Dilenschneider, were pronounced by Joel Klein at The Ferguson Library as he began his talk on civility in education. 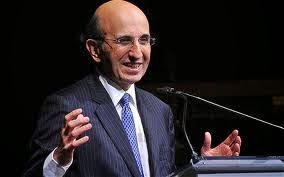 These two leaders in their respective fields of Public Relations and Education  have known each other for over 10 years and exude tremendous respect for each other. (click here to watch the entire segment).

I must wholeheartedly concur with Joel Klein's assessment and, for  reasons I will elaborate on, award Citizen of the Year award to both Bob Dilenschneider and  Mayor Michael Pavia of Stamford. The latter was instrumental in bringing the series to the Ferguson Library and  passionately exemplifies the values of open discourse in governing.

Under his aegis, Stamford has become, arguably, the most civilized city in our country.

In introducing the Civility in America series, back in September 2012, Dilenschneider remarked that an unfortunate incident erupted in his Public Relations business that underscored the need for there to be a rational and national discourse about what constitutes civility in various categories.

In this CBS radio broadcast of September 2012, hosted by Fran Schneidau, Bob is heard saying that the idea of civility has entered Presidential politics where it "has been elevated to a new level." (click here to access the printed story and when on the page click again on right arrow under the bold heading reading WCBS 880 Connecticut Bureau Chief Fran Schneidau on the Story to hear the interview)

Bob's brilliance and acumen is demonstrated by his elevating the level of discourse in many fields including but not limited to  ART, EDUCATION, BUSINESS, POLICE RELATIONS, ADMINISTRATION OF BASEBALL, THE MANAGEMENT OF SPORTS FRANCHISES AND, OF COURSE POLITICS.

We are so appreciative that he has decided to extend this amazing program's lineup of speakers into its THIRD YEAR. The next speaker in the series is George Martin, former defensive end of the New York Giants on Tuesday, January 14th at 6 PM. He will discuss civility on the gridiron. You can register at  http://www.sacredheart.edu/aboutshu/georgemartin. Contact  203-351-8231

Judging from the turnouts, the most popular speaker was undoubtedly Senator Olympia Snowe of Maine. There was an overflow crowd so many of us were shuttled off to another Ferguson room where there was a large screen TV set up.

She has vacated  her Senate seat to focus exclusively on restoring civility to a Congress that has been in a gridlock mode. Here is a link to my blog on her speech.

On the value of a liberal arts education in promoting civility, please read my blog on Georgia Nugent's speech http://rjschwartz.blogspot.com/2013/10/at-ferguson-library-former-president-of.html

Special mention must be made to sponsors of  the series: The Hearst Media Group, Purdue Pharma, The City of Stamford, The Ferguson Library and  Sacred Heart University.

Posted by Richard Schwartz at 8:31 PM