Strawberries and Cream from Wimbledon: With so many top seeds eliminated in early rounds, what next? 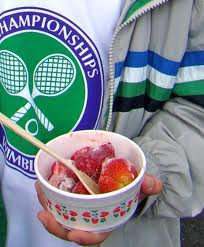 The first week of Wimbledon 2013 has seen so many top seeds eliminated.

Defending champion Roger Federer was eliminated in the second round by 116th ranked Sergiy  Stakhovsky; Federer had not lost this early since Wimbledon 2002.

Rafael Nadal was soundly discharged in the first round by 135th ranked Steve Darcis in three sets.

What does their departure signify for the future of tennis?

A USA Today article asks what we learned in week 1 of Wimbledon? And then lists 10 new names you might not know.

One of these "unknown players" is Britisher Laura Robson aged 19. She has won her first three matches and plays 46th ranked Kaia Kanepi tomorrow

In the 2010, I saw 16 year- old Laura play in the US Open Junior tournament and was very impressed with her southpaw game as she bested her opponent.

Last year I blogged a farewell salute to Kim Clijsters as she exited her playing career at the US Open. She was beaten by Laura Robson in the second round.

Good luck, Laura, and all the rest of the unknowns in the round of 32 which begins tomorrow.


Posted by Richard Schwartz at 10:22 PM No comments:

A.B. Davis Classes of 1958-1960 reunion at Davenport Club is a resounding success 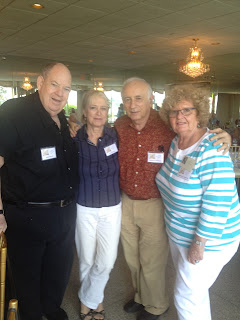 Reunion time for some members of the Class of 1958:
(l.to r.) Jesse Shereff, Ina Geduldig, Richard Schwartz and Kathy Delaney

The weather was beautiful and the sun was smiling as graduates of A.B. Davis classes 1958-1960,  spouses and friends gathered at the Davenport Club in New Rochelle to enjoy a class reunion.

It was a memorable event as I had a chance to connect with classmates, many of whom I have not seen in many  years.

We then enjoyed a grand buffet lunch with lots of delectables including roast beef, salmon and numerous pastas and a fantastic salad bar.

Rich Barnett, class of 59 was our DJ spinning music from the 50's and 60's. Rich is a dance instructor so it was delightful to watch him play and then dance to Spanish and American tangos.

Best of all was sharing memories from our High School days and current events.

Hats off to all who made this event possible!

Posted by Richard Schwartz at 7:26 PM No comments: 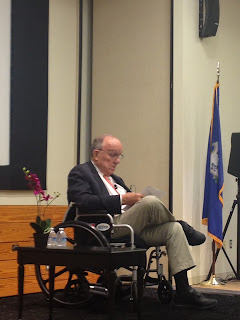 He was introduced by Stamford's Bobby Valentine and Ralph Branca who is the last surviving team member of the 1947 Brooklyn Dodgers. This was the year that Jackie Robinson,  also a resident of Stamford, broke the color barrier.

Both Bobby and Ralph characterized Faye as the man who does things right.

These remarks could not be more right on.

Faye spoke convincingly from his notes.

He said it was only appropriate that Pete Rose was banned from baseball for life because betting on baseball is the top crime. "If you get caught, you're out for life."  It's not about PR he said; its about deterrence.

There will be no redemption or Hall of Fame for Rose.

When questioned about steroids or performance enhancing drugs (peds), Vincent stressed that if you are caught, then you should be out.

He also spoke about  little-known civilities on the diamond. One such example he gave occurs when a batter fouls a ball off and the ball directly hits the catcher on his mask. To give the catcher some time to recover, the umpire will first dust off home plate. Then he will leisurely walk to the pitcher's mound and hand a new ball to the pitcher. He will then head back to the batter's box and again dust off the plate.

Vincent grew up in Waterbury Connecticut, attended Williams College and earned his law degree from Yale.

After practicing corporate banking and securities law, he was named President and CEO of Columbia Pictures. He was then promoted to be Executive Vice President of Coca Cola, responsible for entertainment activities.

Kudos to Faye, Stamford and all the sponsors  of last night's event.

Posted by Richard Schwartz at 6:31 PM No comments:

A highly recommended novel: The Wine of Solitude by Irene Nemirovsky 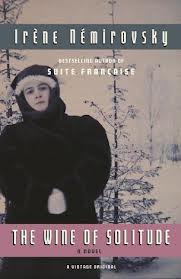 This is a sad yet powerful autobiographical novel that traces with precision and beautiful imagery the early life of Helene Karol.

It begins in the Ukraine when Helene is 8 and traces for a 13 year span her inner growth, as the family travels on the eve of  the Russian revolution (and World War I) first to St. Petersburg, then to Finland and finally Paris.

I had a read about a third of the novel and for some reason, probably due to its depressive scenes, put it down for 5 days. Then when I picked it up, I knew I had to finish it, drawn by the sensitivity and minute mosaic descriptions of people and feelings.

It is amazing that the young  Helene survives in such a dysfunctional family situation and miraculously writes so brilliantly.

Her mother ignores her as she carries on with Max her  live-in lover.

Her father, who is invested in stocks and other business ventures, is hardly ever around and dotes on his wife lavishly hardly aware of his wife's other life.

What seems to hold Helene's life together is the presence of her nanny Mademoiselle Rose who supplies her with the love, sympathy and compassion that is otherwise missing.

Somehow Helene is able to leave an abusive family environment to become a better person than either of her parents.

She does this by isolating herself and discovering an inner strength to overcome her pain and solitude.

As a teenager,  "She looked at the people around her. They didn't even see she was there, but to her as well they were unreal, distant, half-hidden in a mist: vain, insubstantial ghosts lacking flesh and blood; she lived on the sidelines, far away from them, in an imaginary world where she was mistress and queen."

Enjoy this novel, as it leaves not only a bitter aftertaste of a young wine, but also the body and full aroma of an aged vintage.

Irene Nemirovsky, who was deported to and died in a Nazi concentration camp, very much lives on

Posted by Richard Schwartz at 10:11 PM No comments: