Delightful strains of Passover melodies were to be heard at Greenwich Woods yesterday.

Igor, a talented musician, was making his rounds to visit Jewish residents. As he did so,he played songs such as Dayeinu, Let my People Go and Eliyahu HaNavi.

Click on the above video to catch some of the music.

Happy Passover to all!

Posted by Richard Schwartz at 5:02 PM No comments: 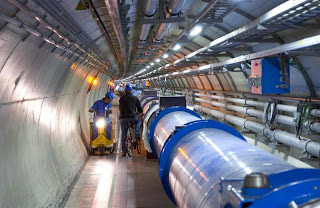 It has been called  'God's Particle.' Others have called it the 'Mother Particle'

Some have called it a kind of 'cosmic molasses' giving mass to particles as they move through it.

Fifty years ago, scientists dreamed up the Higgs Boson field to explain why some particles possess  mass and others do not.

So, in 1998,  the Large Hadron Collider (LHC), the world's largest and most expensive piece of scientific equipment was officially turned on. It is capable of propelling subatomic particles at nearly the speed of light around a 17 mile racetrack to collide protons.

The collisions are to simulate the precise moment of the first big bang when our universe was only a trillionth of a second old. At precisely this instant, it is theorized that the first Higgs boson was created!

Two detectors-- each 7 stories high-- were built to record the collisions at the rate of 40 million pictures per second.

Over 1,000 trillion proton-proton collisions needed to be analyzed to find the elusive distinct 'bump' of the Higgs particle.

And so two teams (Atlas and CMS), each consisting of 3,000 scientists have spent over 10 billion dollars (and counting) to analyze the data.

Then on July 4, 2012- accompanied by cheering and champagne- in CERN headquarters outside Geneva, Dr. Incandela head of the CMA group reported that the two groups had observed a new boson with a mass of 125.3. GeV and a standard deviation of 4.9.

This was a enough to confirm the existence of a Higgs boson-like particle.

My simplification of the described events was aided in great part by the March 5th, 2013 edition of the New York Times Science section--entirely devoted-- with many excellent articles-- to this fascinating subject.

I was amazed at the clarity of presentation.

I was amazed at the excellent graphics which helped to demystify the subject.

The online edition of the printed version is further enhanced by animated graphics depicting the Higgs Boson field in metaphorical terms, a video aptly named Collision Course and links to past articles.

Kudos to the New York Times staff on a stimulating and informative presentation.

Posted by Richard Schwartz at 7:11 PM No comments: 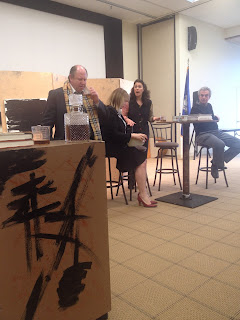 Today, I had the pleasure of seeing an often vibrant and animated performance of Yasmina Reza's God of Carnage.

The play brings together two couples as result of a playground altercation involving their preteen boys: one, yielding a stick struck the other in his face.

The blow broke two incisors and  injured the nerve in one incisor.

While ostensibly, the meeting is to bring together the two boys to effect an apology and reconciliation, in effect, just the unintended occurs.

We get a vivid picture of just how dysfunctional these parents truly are. The focus of the conversation shifts to just how self centered each adult is and how antagonistic each is to his/her spouse and to other spouses.

For instance, the father of the attacker is so preoccupied with his legal clients that he is on another cell phone call every few minutes. His wife, a wealth manager, can't seem to get him to focus for a minute on their son.

The other father loathes his wife and perhaps all women and his wife, we learn, is so preoccupied with writing a book about the tragedy in Dafur. She gets so frustrated with her husband at one point she begins hitting him hard.

Two miserable couples are unable to ever resolve their differences and the play ends with their inability to resolve the differences that brought them together in the first place.

Hats off to the actors in the M&M Production Company who rendered a riveting version of this Broadway show, winner of the 2009 Tony award.

These actors will perform AR Gurney's Love Letters at the Ferguson library on Sunday, April 21st at 2 PM.

Posted by Richard Schwartz at 9:28 PM No comments: 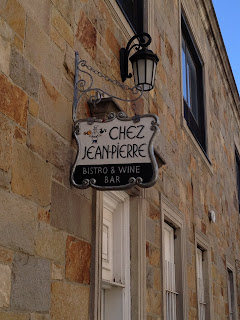 Chez Jean Pierre, a fixture on Bedford Street for over 14 years is closing.

Jean-Pierre Bars, his wife and their children are  returning to their native France.

Another French restaurant called La Barrique will take its place.

In an  Advocate article, the exiting owner  is quoted as saying: "I was one of the first restaurants with a terrace. The whole street has changed a lot and I've seen so many different things happening."

Go for Fitness: Ray Clark hits his club at age 98 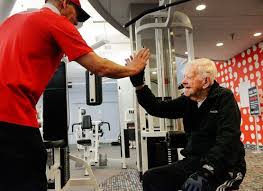 Ray Clark, now 102, working out at his local club
(photo courtesy of the Washington Post)

Every once and a while, I come across a feel good story--a fun fitness story at that.

At age 98, Ray Clark  lost his wife and then lost his daughter.

Today, he is "able to curl 40 pounds, work out vigorously on a rowing machine and deftly pluck bouncing  eight-pound kettle bells from the air with the hand-eye coordination of a much younger man."

Catch the story and a video in this Washington Post story.


Posted by Richard Schwartz at 6:27 PM No comments: 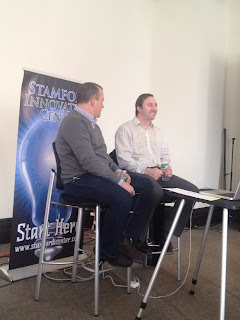 Peter Propp and Skyler Fernandez (from l. to r.) lead discussion
at a recent brown bag luncheon hosted by the Stamford Innovation Center

In a short time, the center has become an incubator for new business start-ups with the backing of Sikorsky Aircraft, the helicopter maker and defense contractor located in Stratford, CT.

Peter Propp, VP of Marketing has been instrumental in organizing networking (including Tuesday night hacker space) events that cover all pertinent topics that are 'hot' issues in the world of  information technology.

Back in January, Peter led a lively discussion with Skyler Fernandez, a local venture capitalist, on how he goes about researching, funding and then counseling start-ups in which he invests.

Today, Peter and Jonathan Yarmis held a You Tube stay at home dialogue (due to the inclement weather) that covered in depth such topics as Yahoo's work-at-home policy, the new Facebook feed and the importance of such apps as Zemanter in composing blogs and Evernote for remembering people and events.

Posted by Richard Schwartz at 4:08 PM No comments: