The Man in the White Sharkskin Suit by Lucette Lagnado: A Great Read 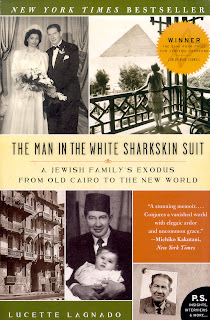 Here is another book that seemed to jump off the shelf at my local library.
At first, it barely held my attention. However, it soon captivated me as it spans the lost world of Aleppo, Syria in the early 1900's, Cairo, Egypt in the 1940's and 50's, Paris and then the Bensonhurst section of Brooklyn.

The author delineates many of her family members in great detail. However, it is her father Leon who comes to dominate the family history. A successful businessman in Cairo with lots of clients, flair for trading stocks and an amazing wardrobe, he is constantly on the move with a surplus of energy. It is the night life that he lives for.

" Except for Friday nights, he didn't even bother to stay for supper. If he came back at all after work, it was to go immediately to his room and dress for the evening ahead, an elaborate ritual that he seemed to enjoy almost as much as what the night held in store.


"He was meticulous and more than a little vain. He had assembled a wardrobe made by Cairo's finest tailors in every possible fabric-linen, Egyptian cotton, English tweed, vicuna, along with shirts made of silk imported from India. There were also the sharkskin suits and jackets he favored above all others, especially to wear at night."


"My father was such a habitue of the different establishments, there wasn't a club owner who didn't know him on a first-name basis. If there was a group of British officers--and there invariably was--he would join them at their table, and it didn't matter that he was both an Arab and a Jew. He was really one of them."


The British officers called him Captain Phillips because of his debonair manner and British accent.


Leon marries a woman over 20 years his junior and his life style does not change; he continues his nighttime excursions. Somehow, he finds time to attend daily religious services often times showing up on the heels of his nightlife.

Leon's life changes dramatically after he injures his leg and hip in a fall and he must cut back on his nocturnal activities. He now focuses his attention on his littlest child Loulou, the author of this book.

With the fall of King Farouk and then the rise of the anti-semitic Nasser in the mid-1950's, the Lagnado family led by Leon reluctantly flees a life of comfort in their spacious apartment on Malakah Nazli, a fashionable street in the heart of Cairo.

With all their belongings packed into 26 suitcases and only $200 in their pockets (the maximum money they are allowed) the family flees first to Alexandria, then onto Athens, Genoa, Naples, Marseilles and  endures a year-long stay in a run- down neighborhood in Paris (supported by HIAS)  before they are given clearance to settle in America.

Once in America, Leon takes a job as a tie salesman selling his wares at subway stations and on Canal Street in Manhattan. Invariably, he takes Loulou with him. He dearly misses Cairo and continues to attend daily services in his neighborhood sometimes staying up to 9 hours praying and reading Psalms and other holy texts.

The family fabric falls apart as the older children move away.

Now we learn that Loulou's childhood illness  (originally thought to be cat scratch disease) is diagnosed as Hodgkin's disease and she develops a close relationship with a cancer specialist who helps to nurture her away from the dominance of her parents.

Indeed as her father's and mother's health falter, it is his daughter Lucette (Loulou) who becomes the heroine of the family saga as she learns to adapt to the new American culture.

The book is a great read!

Posted by Richard Schwartz at 10:39 PM No comments:

Labels: The Man in the White Sharkskin Suit 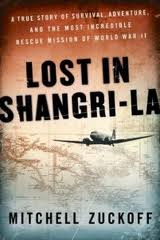 This book grabbed my attention from its very beginning.

The cover hails it as "A true story of survival, adventure and the most incredible rescue mission of World War II."

This book lives up to its billing and much more.

On May 13, 1945, a C-60 transport plane, called the Gremlin Special, carrying 24 members of the U.S. military set off on a sightseeing tour of a remote mountain valley on the island of New Guinea.

The pilot crashed into a mountain and only 3 passengers survived.

The tale tells how they hiked through dense forest (two had severe injuries and were suffering from gangrene) into the valley, made friends with the 'stone-age' natives and subsisted on daily rations that were parachuted into them.

Miraculously, the natives, presumed to be cannibals and warlike, thought they were incarnations of white sky gods who figure in their belief system. So, the natives refrained from harming them.

The rescue is effected by a brave group of Filipino-American paratroopers, who utilize gliders and a cargo plane with a big hook.

Once again, this book demonstrated the magic of a book leaping from the shelves as I walked through the library.

The book is an engrossing must read and is documented by extensive research.
Posted by Richard Schwartz at 3:33 PM No comments:

The Cellist of Sarajevo: A Book that flew off the Library Bookshelf 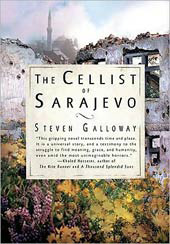 Lately, I've come across a number of excellent reads which I will share with you.

What is amazing is how I discovered them.

On two occasions, I was merely dropping off library books that were (over?)due. Then suddenly as I exited, a book suddenly caught my attention.

It was as if the book was saying to me: ''grab me, take me home, you won't be disappointed."

And true to form, I was not disappointed on the last two occasions.

The Cellist of Sarajevo by Steven Galloway is war fiction at its best. And it is a very fast read.

The novel is in part about the inspiration that a cellist gives to those who have chosen to remain and and retain possession of their once beautiful city.

Set against the backdrop of the siege of Sarajevo, the story mainly details the lives of four individuals who are surviving-- as snipers rein down ammo upon them from the hills surrounding the city.

Arrow is one of them. She kills a sniper whose mission it is to kill the cellist. (The latter plays his instrument daily late in the late afternoon at the location where mortar shells killed 22 people who were on a bread line.)

The book depicts the the humanity of the quartet as they go about their tasks -- ducking bullets-- as they transport water, bread and other essentials in a city where the majority of buildings have been turned into skeletons.

It is a must read!
Posted by Richard Schwartz at 2:51 PM No comments:

Steve Jobs: An American Hero, An Entrepreneur for All Seasons 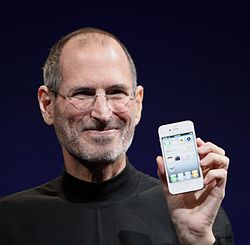 Steve Jobs holding a white iphone  4
Late in August this year, Apple announced that Steve Jobs was stepping down as CEO and would remain as Chairman. The reason cited was ill health. He had a liver transplant back in 2009 and was suffering from an incurable rare cancer. (It was clear then that his days were limited...)

Almost immediately, there began an outpouring of articles about Steve--most of them were laudatory assuring him a place in the pantheon of business greats.

Here is a sampling of comments from a few of the articles.

From Joe Nocera's What Makes Steve Jobs Great (NYT, Aug. 27):  Jobs "violated every rule of management. He was not a consensus-builder but a dictator who listened mainly to his own intuition. He was a maniacal micromanager. He had an astonishing aesthetic sense, which businesspeople almost always lack. He could be absolutely brutal in meetings:  I watched him eviscerate staff members for their bozo ideas."

The extraordinary personality of Jobs is captured by Michael Malone in Steve Jobs and the Death of the Personal Computer (WSJ, 8/31):  "Every generation produces a few individuals whose will to restructure the world in their own image is so powerful that they seem to distort reality itself. They change the world, not always for the better and that in the U.S. they often choose to pursue entrepreneurship and industry rather than politics is one of the uncelebrated blessings of American capitalism. Mr. Jobs--who emerged from an uncertain childhood brilliant, charismatic and charged with an ambition that would make most mortals blush--is one of those figures, a fact recognized before he reached adulthood."

Jason Pontin wrote the following in Apple Without its Genius Will be Less Lovable (FT, August 31):  "He does not care about the computer industry for itself, which is why he as been able to expand Apple's business beyond computers to music players, phones and tablets. Instead he wants people to do things they couldn't do before: create documents on laptops with fonts that only professional printers once used; listen to music on phones; read books, play games and watch movies on slim, crystalline screens. The paradox of all preoccupation with delighting people is that he disdains questioning customers....In short, he really is that overused word: a visionary."

In Conflicting Clues from Iconic CEO Departures, Sree Vidya Bhaktvatsalam and Christopher Condon of Bloomberg News (8/30) report that the year after Bill Gates departed as CEO of Microsoft in June 2006, the stock rose 38 percent; however, General Electric Co. stock plummeted 16 percent after Jeff Immelt replaced Jack Welch ten years ago. As a post script to this article, Apple stock is up about 40 points; Just last week ending October 14, it rose 14% closing at a record 422!

Finally in Apple gives new CEO Cook $28 billion cash for acquisitions, Danielle Kucera and Rita Nazareth (Bloomberg News 8/28) we read: "Even without a single billion-dollar acquisition, Apple's value under Jobs increased by more than $300 billion in the past 10 years. Jobs has also doubled Apple's net income every two years since the company reported its last annual loss in 2001."

As of this past Friday, Apple is now worth $391 Billion; Exxon Mobil comes in second at $380 Billion. Quite an amazing feat for Steve Jobs who left such a strong imprint of success on his company!
Image source (1)
Posted by Richard Schwartz at 4:45 PM No comments: