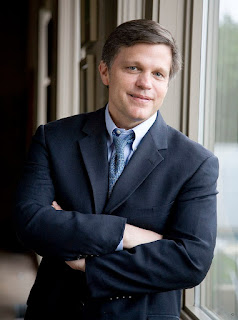 He began by introducing us to Charles Thomson, secretary of the Continental Congress first appointed in 1774. After Washington became our first president, Thomson remained a fierce supporter of allegiance to our country's leader.

Thomson gathered many papers with a view of writing a history of his time.  Toward the end of his life , he destroyed nearly all his papers. Brinkley suggests that one of the reasons may have been his desire to leave no record of the contentious and fiercely fought election of 1800 between John Adams and Thomas Jefferson.

Polarization of political parties, vehement rhetoric and gridlock have been a part of American politics from its inception.

The highlight of the evening was his discussion of his latest book "American Moonshot: John F. Kennedy and the Great Space Race."  Though the Russians were first at orbiting a man in space in April 1961, President  Kennedy announced in May, 1961 his intention to land a manned spacecraft on the moon by the end of the decade.

This year we celebrate the 50th anniversary of the moon landing which unfortunately Kennedy did not witness. But what is significant, says Brinkley, is that this project ushered in a time when both parties laid aside their enmities and joined in a camaraderie to help fund the project to land a manned spacecraft on the moon.

Civility had commandeered a Camelot 'moment' in American politics.

When asked what he would do to ameliorate the current atmosphere of incivility which plagues our national government, Brinkley suggested that answer lies in the education of our youth  We must reintroduce civics and geography in the classroom curriculum.

It is only through understanding how our government functions can there exist an atmosphere of respect and tolerance for the opinions of others.

Again, thanks to the Dilenschneider group for their support of Civility in America series as it enters its eighth year.
Posted by Richard Schwartz at 7:54 AM No comments: