Jonathan Franzen's Purity: 21st Century's familial and digital Society and its Discontents laid out on a far reaching canvas with broad strokes of satire and comedy 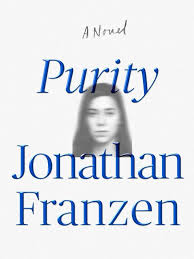 What author Wallace Stegner has beautifully  laid out in Angle of Repose-- the often destructive creations of civilization on the pristine naturally-faced wonder of the western frontier, so too, Jonathan Franzan dutifully and brilliantly digs deep below the surface of his characters to reveal the intimate psychological motivations, feelings and nuances and dark uncovered secrets that are our defenses, our bulwarks against the reality of facing our true selves.

This novel is a masterpiece and --along with Angle of Repose-- exhibits some of the best writing on issues that affect us all: the need for enlightened conservation, global warming, information overload and the leaking of classified information via spyware, the after-shocks of the fall of the GDR in 1989, the dilemma of trust fund babies, the magnification of student debt, the seamy side of communal living a la Berkeley/Oakland/ Haight Ashbury, the perversion of charisma and above all, the Socratic maxim "know thyself."

The main character is Pip (nickname for Purity), the  20- something millennial age  daughter of a reclusive mom, herself an estranged wife and unwilling heiress to a billion dollar inheritance. Mother Anabel has been working 10 years in a local supermarket as a check out clerk,  living in a small cabin in the California Redwoods in the mountains near the Ocean.

Pip's passion is to uncover the identity and whereabouts of her father who she has never met and who mom refuses to reveal. Pip is living in a communal house in Oakland and is recruited to work for an Julain Assange like character in Bolivia, Andreas Wolf. In a section entitled The Republic of Bad Taste, Franzen  takes us back to the Stasi dominated repressive post WWII  poverty- stricken era in East Germany before its fall on Nov. 4-9, 1989 (148-153).

As a counter play to Pip's obsession with finding her dad, shades of Hamlet are suggested with the appearance  of a ghost-like figure, a real apparition who shadows the 14 year old Andreas and his buddy Joachim (a Horatio -like guy)  for over a week and claims to be his father. Here is some brief dialogue occurring near railroad tracks under the Rhinstrasse Bridge

"What would say," the ghost said "if I told you I am your father?"

"Your mother is Katya Wolf, nee Ebersfeld. I was her student and colleague at Humboldt  University from 1957 until February 1963, at which time I was arrested, tried and sentenced to ten years in prison for subversion of state."

"....I went to prison for the crime of having relations with your mother before and after she was married. The after in particular was a problem."

"Andreas," the dirtbag called after him. " I held you when you were a baby."

" Go fuck yourself. You're filthy and disgusting."

Later on, the  brilliant and quirky Wolf, embarrasses his apparatchik stepfather, a high official in the GDR government, and his mom Katya, a University Professor of English, with his publishing a mocking poem entitled Muttersprach/ Mother Tongue (194)  and then goes 'underground' doing social work for disturbed teenagers out of the basement of a local church.

We are exposed to his excessive libidinous energy, his discovering the internet as a way of exposing stories with moralistic undertones and his involvement with the most beautiful, sensual and ravishing of female teenagers, Annagret,

And so begins the impetus for an action, the secret that obsessed-driven Wolf must contain at any cost--which I won't reveal.

Tom Aberrant, an investigative reporter for a Denver online newspaper runs across Wolf in Berlin, befriends him and gets deeply involved his Wolf's secret. It turns out that Tom is the father of Pip and the one person who can expose Wolf's heinous deeds to the world.

The unraveling includes sending Pip to work for Tom in Denver with spyware to read all Tom's files to see if there is a leak!

The world of Franzen shows the impurities, the inconsistencies, the hypocrisies and  the tainted lives of those living behind walls, behind secrets. He reveals the sheer brutality, bullying and sexual predatory behavior of those in positions of power.

His mastery of language is formidable!

The novel ends on a high note of Tom and Anabel being reunited in Anabel's cabin after all these years of separation and Pip uncovering the truth about the mystery of her paternity by her surreptitiously reading Tom's memoir in which he reveals all.
Posted by Richard Schwartz at 4:26 AM No comments: