Accident on Oaklawn Avenue this afternoon in Stamford 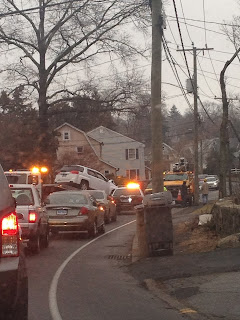 The accident shown above took place on Oaklawn Avenue early in the afternoon.

Apparently, the white van-- shown angled on a tow truck-- side swiped a utility pole.

Traffic was held up in both directions for no more than 5-10 minutes as the teams of workers
went about their work.

What is amazing is how quickly the police and utility company worked in unison to get the traffic moving.

Hats off to all!

Posted by Richard Schwartz at 5:55 PM No comments:

At the Australian Open: Azarenka takes out Stephens in semi finals under a cloud of controversy 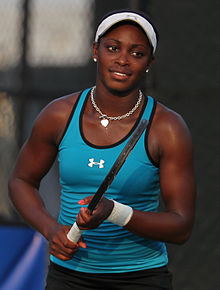 "Azarenka didn't play in the spirit of the game-she faked injury to break Stephens momentum as she knew she was on the ropes and hung on to snatch the match."

There is a lot of truth to this statement.

The semifinal match between the number one seeded Azarenka (BLR)--on her way to defend her 2012 title- and the number 29 seeded Sloane Stephens (USA) began seemingly as an easy rollover for the Russian as she easily won the the first set 6-1.

Stephens missed so many opportunities to break her opponent in the first set.

Each time, Sloane was ahead of her opponent, she would commit an unforced error. Obviously, her play was a sign of nerves (and shock) as she had unexpectedly upset her tennis idol Serena Williams the day before.

As the match progressed in the second set, Stephens started to loosen up mentally and her game toughened as the teenager realized and played as if she had nothing to lose.

Azarenka was ahead 5-3 serving  and was on the verge of imploding.

Time and time again Azarenka was was at match point. You could see and feel her frustration as she was seemingly going through a breakdown.

Stephens bravely had fought off 5 match points and eventually took the set.

At this point Azarenka called for a 10 minute medical time out supposedly for knee and chest injuries.

When she returned, she broke Stephens' serve to close out the match.

When interviewed just after the match, Azarenka commented that "I couldn't breathe. I had chest pains --it was like I was having a heart attack."

Was this a case of poor sportsmanship on her part?

You be the judge!

Posted by Richard Schwartz at 5:05 PM No comments:

Yankee Gas to the rescue here in Stamford

At about 11 PM last Saturday night, I was startled by a  drilling sound outside on the street.

I glanced outside to notice several Yankee Gas trucks, several crewman along with a John Deere loader.

All through the night, Yankee Gas worked diligently  digging up both a narrow street path and then the neighbor's lawn.

By 7 AM they had completed their work and left.

Then a meter installer arrived and told me the neighbor had phoned to report a complete loss of gas.

This was no simple gas leak where the customer still can access heat.

By 8 AM, the work was complete.

The street was repaved and the neighbor was much relieved.

Keep in mind this was a Saturday night going into Sunday morning.


Posted by Richard Schwartz at 6:21 PM No comments:

A strong recommendation: The Corrections by Jonathan Franzen

This is an exceptional novel.

On one level it reads like a documentary-- often critical of our times.

Yet, its power comes from the detailed portraying of a once happy family that has become so dysfunctional that it makes our  families with their all their foibles appear rather conventional.

At the center of the novel is Enid the proud mother who just wants to have her children home for Christmas in a mid western town called St. Jude.

Her  husband Alfred. once a gifted Railroad executive and inventor, is suffering from Parkinson's disease. 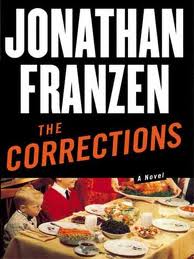 Their eldest son Gary is a portfolio manager and is constantly arguing with his wife who claims he is clinically depressed and cannot convince either his wife or children to accompany him for Christmas.

Chip, the middle child, has lost his academic job because of an affair with one of his students; this despite the fact he wrote the very regulations prohibiting such conduct. He then acts an internet engineer for a Lithuanian mogul attempting to bring his country's assets to the world economy.  He is forced to leave Lithuania during a rebel takeover

Finally, there is Denise their youngest, a culinary whiz who exits a stable marriage to establish one of Philadelphia's most successful restaurants. She is fired from her position by her backer after he discovers she's involved in an affair with his wife.

Despite the length of the book --at some 566 pages --and the flow and symbolism of the language, often gushing like a waterfall, the book held my attention.

Here is an example:  "The chair was a monument and a symbol and could not be parted from Alfred. It could only be relocated, and so it went into the basement and Alfred followed. and so in the house of the Lamberts, as in St. Jude, as in the country as a whole, life came to be lived underground."

And, so our collective lives will emerge from the underground into the full glare of daylight.

This is a book that pierces the veil around the follies of our families, business dealings and even world politics and order.

It is a sharp seething social satire!

Enjoy!
Posted by Richard Schwartz at 2:31 PM No comments: