In 1998, Dr. Irwin Braverman, Yale School of Medicine professor of dermatology,  started the "Observation Skills Workshop" --a joint program between the Yale British Art Gallery and the medical school. 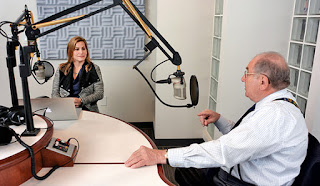 Dr.Jacqueline Dolov and Dr. Irwin Braverman host "The Art of Noticing"
the first discussion in a new series of Yale netcasts. (photo by John Curtis/Yale University)

The program came about because Dr. Braverman was finding that students were not describing patients as well as he thought should have been.

He brainstormed the idea of exposing students to unfamiliar objects --in this case 19th-century victorian paintings from the gallery. Then he had students itemize as many details as they could from a painting, followed by the students meeting in a conference room where relate their art observations to photos of actual patients.

In a study, he found that "first year medical students detected important details nearly 10 percent better than peers who had not." ( a later study performed by one of his students put the figure at 20%)

This procedure spurs the students to become better doctors because the careful observation skills can actually help them in making better diagnoses and otherwise prevent them from 'jumping to conclusions' which often prove wrong.


The workshop  is now a required course at Yale for all first year students. At least 24 other institutions have adopted the course into their curricula.

Kudos to Dr. Braverman and his students for bringing the liberal arts into medical education.

For more details on the mechanics of the program, click here.


Posted by Richard Schwartz at 3:04 AM No comments: