A Celebration of the Life of Columbia University Professor Edward W. Tayler 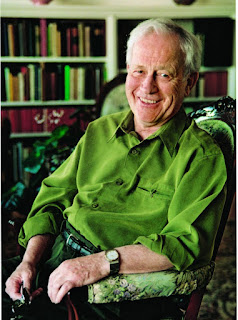 
On Friday, March 15, over one hundred plus students, colleagues, friends (and family) gathered at Columbia University's Low Rotunda to pay tribute to the inspirational life of 16th and 17th Century English Professor Emeritus, Edward W. Tayler.

(Professor Tayler  is remembered as being both a Shakespeare and Milton scholar and April 23rd happens to be the very date on which William Shakespeare was both born and died.)

The program was introduced by Michael Rosenthal, Professor Emeritus;  he was followed by reminiscences by ten of  his students. They included three authors, a playwright (Tony Kushner), a journalist, a lawyer (Abbe David Lowell) and four Professors.

Here are just a few remembrances of Ted:

" Dark and light...God set up opposites, Ted said, which is something we all do--all the time in life. Moral opposites...how do you escape the binary bind? There are people you touch and people you don't touch. Every choice becomes an exclusion.  His injunction all year was think double. When you think you understand something, try to penetrate its opposite and see if they have a relationship to each other....The voice was remarkable...baritone...steady, quiet, very penetrating with little traces of mockery and wit...." (David Denby, CC'65, author)

"....short, self possessed, still young, standing directly before us with a burning cigarette as his only prop-- delivering sentences in a clipped, dry, dead pan voice---occasionally pausing to mumble a caustic witty aside....Ted had a most military bearing in class. The general had a plan a step by step strategy to guide us through a series of small epiphanies toward greater and greater clarity about Milton's work."  (Paul Auster, CC'69, author)

Ted, I  miss you, too. I am privileged to be numbered among the many students who were lit up, inspired and enriched by your exemplary teaching. Here is my tribute penned nearly 10 years ago.

The event is now available for viewing on you tube

Posted by Richard Schwartz at 12:34 PM No comments:


It was a bold decision when made.

I have never thought I would make the move---

About two weeks ago I traded my daily subscription to the print edition of the New York Times for the digital one.

Why have I done so at this time?

First I am on overload with daily print news media. Besides the New York Times, I have read and still read the Wall Street Journal and also our hometown daily, the Stamford Advocate---all cover to cover. This routine is  overwhelming as I am constantly playing catch-up and nearly always feel behind the eight ball.

I have always felt it necessary to stay on top of the news---growing up in a family that always had the Times delivered daily and where we all were expected to be up on the latest news. And just recently I led a biweekly discussion of current events for seniors in our community--making it necessary for me to up on international, national and local news.

In addition, I have always been a 'print'  man who has always enjoyed the tangible hard copy book or daily rag in my hand --spanning my careers as English major, college and high school English and science teacher, print advertising/space sales, then publisher of Brooklyn Community Magazine.

Of course, there are other online news sources such as Huffingtonpost, Politico, Drudgereport, the Daily Mail, The Hill, etc. besides my New York Times online subscription.

I will miss the display ads and the daily and Sunday crossword puzzles in the print edition.

Stay tuned as I further assess my decision.
Posted by Richard Schwartz at 1:13 PM No comments: