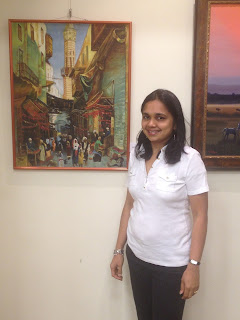 Renu Vora and her winning painting

39 entries including both paintings and photographs were on display.

The winning piece is entitled Travel in Middle East Cities painted by Renu Vora pictured above. 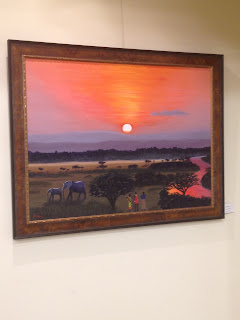 Another colorful entry is Serengeti Sunset painted by Elizabeth Killgore presented above.

The show will be on display at Ferguson Library until January 2013.

Posted by Richard Schwartz at 12:53 PM No comments: 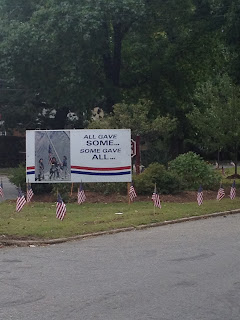 Serena Williams reigns as the Queen of World Tennis 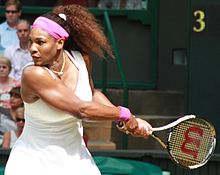 Serena Williams at the 2012 US Open
(courtesy of wikipedia)
Last night Serena Williams showed why she has been so dominant on the court.
Just as her opponent, Victoria Azarenka, ranked number one in the world, was on the cusp of victory, leading 5-3 in the third set, Williams turned up the pressure taking the next four games and the match at 6-2, 2-6, 7-5.

Serena has the most powerful serve in women's tennis which was evident in the first set which seemed to set the stage for an easy two set victory.

But such was not the case. Azarenka got much stronger in the second set which started with Serena losing her serve on a double fault  Serena's momentum faded as Azarenka's game picked up a notch and she cruised to take the second set.

In a post game interview, Serena said she was resigned to giving the runner up speech as her opponent dominated most of the third set. But Serena dug in and won crucial points and games to post her second Grand Slam of the year.

Congratulations to Serena , now number 4 in the world and to Victoria, winner of the 2012 Australian grand slam title, ranked number one.

However, we all know that  Serena is the best woman tennis player in the world.

Good luck to both players who are both the tops.
Posted by Richard Schwartz at 4:19 PM No comments:

The Sleepwalker by Paul Grossman is a highly recommended novel

This novel is a great read.
It is set against the backdrop of Berlin in 1933 when the Weimar Republic came under control of Hitler and the Nazi Party.

Willi Kraus, a decorated World War I soldier, is an Inspector-Detektiv in the Berlin police department who happens to be Jewish. His two kids have been packed off to Paris with their rich grandparents and he is being urged to leave as well.

He can't leave as yet because he is drawn into solving a mysterious murder of a young women (whom he calls the mermaid) whose body is washed ashore on the Havel River. He discovers her legs to be deformed as a result of an operation performed on her.

Despite the strong antisemitic atmosphere he must endure, Willi persists until he locates an early  concentration camp where the likes of Josef Mengele and other scientists are performing hideous experiments and burying hundreds of their innocents victims.

I invite my reader to connect all the dots in this well crafted story.

What made the novel so 'real' were cameo appearances by Himmler, Goebells, Mengele, Marlene Dietrich, General Von Hindenburg and Ernest Roehm.

In addition, the street scenes around  Berlin landmarks such as Alexanderplatz (with the Wertheim and Tietz department stores) are unforgettable:  "Up against the building, rows of beggars in little more than rags held out hats to passersby, many veterans of the Great War, legless, eyeless and noseless.
...The Great Depression had left three-quarters of a million Berliners unemployed. One man with all his worldly possessions packed in filthy cardboard boxes on his shoulders shuffled past with wide dead eyes. Another sleepwalker, Willi thought."

Grossman the author seems to imply that the bulk of German society was sleepwalking at the time. Willi is acting imperviously to the racial hostility directed to him as are the towns people who were denying the horrific odors being emitted from the concentration camp in their town.


Posted by Richard Schwartz at 8:13 PM No comments:

Hats off to the USTA's online coverage of the US Open

Unable to attend the US Open in person?

Hold your breath, because there is now a remedy for your situation.

The best alternative to attending the US Open is accessing up to six simultaneous live matches on the
Us Open website.

Simply click on watch live, then click on the courts icon on the upper left and begin enjoying tennis on your computer screen.

Other icons link to Keys to the Match, Match Chat, Match Stats and Picture within Picture.

And with your TV screen set to CBS or ESPN you have a seventh channel.

Thank you USTA!
Posted by Richard Schwartz at 4:39 PM No comments: